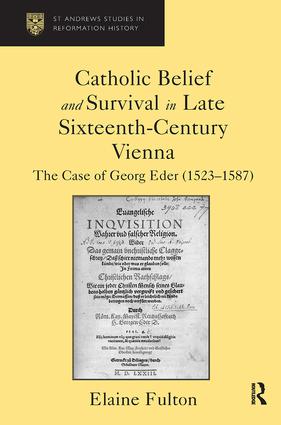 Dr Georg Eder was an extraordinary figure who rose from humble origins to hold a number of high positions at Vienna University and the city's Habsburg court between 1552 and 1584. His increasingly uncompromising Catholicism eventually placed him at odds, however, with many influential figures around him, not least the confessionally moderate Habsburg Emperor, Maximillian II. Pivoting around a dramatic incident in 1573, when Eder's ferocious anti-Lutheran polemic, the Evangelical Inquisition, fell under sharp Imperial condemnation, this book investigates three key aspects of his career. It examines Eder's position as a Catholic in the predominantly Protestant Vienna of his day; the public expression of Eder's Catholicism and the strong Jesuit influence on the same; and Eder's rescue and subsequent survival as a lay advocate of Catholic reform, largely through the alternative protection of the Habsburgs' rivals, the Wittelsbach Dukes of Bavaria. Based on a wide variety of printed and manuscript material, this study contributes to existing historiography by reconstructing the career of one of late sixteenth-century Vienna's most prominent figures. In a broader sense it also adds significantly to the wider canon of Reformation history by re-examining the nature and extent of Catholicism at the Viennese court in the latter half of the sixteenth century. It concludes by emphasising the importance of influential laity such as Eder in advancing the cause of Catholic reform, and challenges the prevalent portrayal of the sixteenth-century Catholic laity as an anonymous and largely passive group who merely responded to the ministries of others.

’This is a solidly researched and carefully argued study…’ English Historical Review ’… an instructive case study in which the fruits of extensive archival research are presented in a convincing fashion, and with much engaging enthusiasm for its important subject.’ Journal or Ecclesiastical History ’… this deceptively modest book opens an important methodological pathway to the study of early modern Catholicism in central Europe.’ European History Quarterly ’[Fulton’s] careful research offers an important contribution to recovering a lesser-known voice of the Reformation era.’ Religious Studies Review ’… [Fulton’s] work constitutes the most important scholarly work to date on the role of Georg Eder and demonstrates the promising nature of future work on lay reformers for our understanding of early modern Catholicism.’ Sixteenth Century Journal

Contents: Introduction; Eder's Vienna; Promotion and prominence, 1550-73; Service to the church, 1550-73; 1573: imperial condemnation; Wittelsbach patronage, 1573-87; 'Whoever is not like a Jesuit, is not a Catholic'; Conclusion; Select bibliography; Index.

Elaine Fulton is Lecturer in the Department of Modern History at the University of Birmingham, UK.