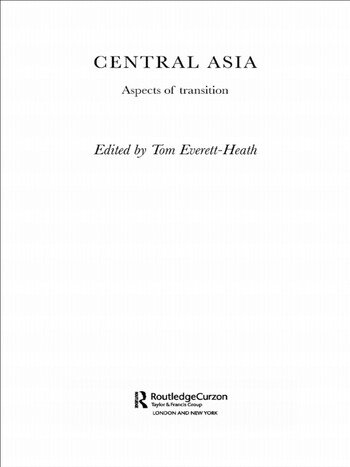 The five central Asian States of Kyrgyzstan, Tajikistan, Turkmenistan and Uzbekistan stand at the crossroads of world civilization. Influenced by South Asia, Iran, China and Russia, this region which has recently burst onto the world stage once again, guards a distinct identity. This collection by established experts on the area covers the dramatic Soviet interventions of the early twentieth century, and details the role of ethnicity and the contribution made by Islamic impulses in the process of building the modern nation states.

1. Turkfront: Frunze and the development of Soviet counter-insurgency in Central Asia 2. The Kokand autonomy, 1917-18: political background, aims and reasons for failure 3. Ethno-territorial claims in the Ferghana valley during the process of delimitation, 1924-27 4. Land and water 'reform' in the 1920s: agrarian revolution or social engineering? 5. Nation building in Turkey and Uzbekistan: the use of language and history in the creation of national identity 6. Nation building and identity in the Kyrgyz Republic 7. The use of history: the Soviet historiography of Khan Kenesary Kasimov 8. Soviet development in Central Asia: the classic colonial syndrome? 9. Environmental issues in Central Asia: a source of hope or despair? 10. Identity and instability in the post-Soviet world: Kazakhstan and Uzbekistan 11. The Uzbek Mahalla: between state and society 12. 'Fundamentalism' in Central Asia: reasons, reality and prospects 13. Water: the difficult path to a sustainable future for Central Asia