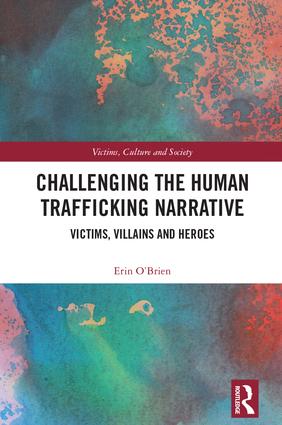 What is the moral of the human trafficking story, and how can the narrative be shaped and evolved? Stories of human trafficking are prolific in the public domain, proving immensely powerful in guiding our understandings of trafficking, and offering something tangible on which to base policy and action. Yet these stories also misrepresent the problem, establishing a dominant narrative that stifles other stories and fails to capture the complexity of human trafficking.

This book deconstructs the human trafficking narrative in public discourse, examining the victims, villains, and heroes of trafficking stories. Sex slaves, exploited workers, mobsters, pimps and johns, consumers, governments, and anti-trafficking activists are all characters in the story, serving to illustrate who is to blame for the problem of trafficking, and how that problem might be solved. Erin O’Brien argues that a constrained narrative of ideal victims, foreign villains, and western heroes dominates the discourse, underpinned by cultural assumptions about gender and ethnicity, and wider narratives of border security, consumerism, and western exceptionalism.

Drawing on depictions of trafficking in entertainment and news media, awareness campaigns, and government reports in Australia, the United Kingdom, and the United States of America, this book will be of interest to criminologists, political scientists, sociologists, and those engaged with human rights activism and the politics of international justice

"A powerful analysis of dominant narratives about human trafficking, revealing how these stories produce problematic, narrow images of a range of actors – women, migrants, governments, NGOs, consumers, corporations, activists, etc - while all too often conflating sex work and trafficking. O’Brien deftly illuminates how global positioning, race, ethnicity and gender work to construct simplistic ideas about the ideal victim as a passive young woman, the villain as the foreign, and the hero as western, and argues convincingly for a diversification of these images and the production of counter-narratives that can render more realistic and accurate depictions. A highly accessible book that urges us to think carefully about matters of agency, complicity, and social responsibility – a must-read for any student or activist concerned about human trafficking."

"In this enthralling book, Erin O'Brien creates a compelling analysis of the most common stories about human trafficking as told by Western governments, NGOs and through media and entertainment channels. These stories feature blameless victims, evil traffickers and heroic Western actors, but through O'Brien's expert dissection she enables us to see clearly the limits of such uncomplicated tellings and to question the policy approaches and activism which emerge in their wake."

3. From Sex Slaves to Migrant Men

Erin O’Brien is Senior Lecturer in the School of Justice, Faculty of Law, Queensland University of Technology, Australia. Dr O’Brien’s current research examines political activism and policy making on irregular migration, labour exploitation, and sex work. She is the author of The Politics of Sex Trafficking, and co-editor of Crime, Justice, and Social Democracy.