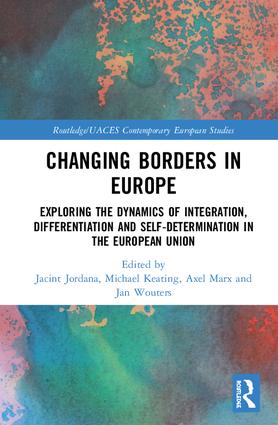 Exploring the Dynamics of Integration, Differentiation and Self-Determination in the European Union, 1st Edition

Changing Borders in Europe focuses on the territorial dimension of the European Union. It examines the transformation of state sovereignty within the EU, the emergence of varied self-determination claims, and the existence of a tailor-made architecture of functional borders, established by multiple agreements.

This book helps to understand how self-determination pressures within the EU are creating growing concerns about member states’ identity, redefining multi-level government in the European space. It addresses several questions regarding two transformative processes – blurring of EU borders and state sovereignty shifts - and their interrelations from different disciplinary perspectives such as political science, law, political economy and sociology. In addition, it explores how the variable geographies of European borders may affect the issue of national self-determination in Europe, opening spaces for potential accommodations that could be compatible with existing states and legal frameworks.

Part I: Blurring of EU Borders across Member States

5. Secessionism Revisited: Unequal Market Insertion and its Relevance for the Analysis of Brexit [Juan Díez Medrano]

8. The European Union and the Recognition of States [Jessica Almqvist]

9. Democracy and Borders: External and Internal Secession in the European Union [Ferran Requejo and Klaus-Jürgen Nagel]

10. Teleological and Reflexive Nationalism in the New Europe [Neil Walker]

12. Secession and the Limits of Democratic Decision-Making [Jure Vidmar]

13. Referendums in the United Kingdom and the European Union: Challenging Federalism? [Stephen Tierney]

15. Self-determination and the Reconfiguration of the Nation-state in Europe [Jacint Jordana, Adam Holesch, Michael Keating, Axel Marx and Jan Wouters]

Jacint Jordana is Professor of Political Science and Public Administration at the Universitat Pompeu Fabra and Director of the Institut Barcelona d’Estudis Internacionals (IBEI), Spain.

is Professor of Politics at the University of Aberdeen and Director of the Centre on Constitutional Change, UK.

is Deputy Director of the Leuven Centre for Global Governance Studies, University of Leuven, Belgium.

is Professor of International Law and International Organizations at the Leuven Centre for Global Governance Studies, University of Leuven, Belgium.