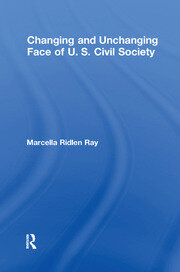 "Ray has written a book that should be read by anyone interested in the current debates about the general health of civil society in the United States."--American Journal of Sociology The formation, maintenance, and well being of American civil society is a topic of intense debate in the social sciences. Until now, this debate has lacked rigor, with the term "civil society" commonly used interchangeably and imprecisely with other terms such as civic engagement. Today's discourse also lacks methodological discipline and relies too heavily on narrowly selected evidence in support of a particular argument. In this invaluable contribution to the debate, Marcella Ridlen Ray supplies an empirical study based on a theoretical model of democratic civil society, one that posits high levels of communication, diversity, autonomy, mediation, and voluntary association. In Ray's account, the emergent story of U.S. civil society is that of a dynamic institution, not necessarily one that is linear in its progression. It is a tale of flux, resilience, and stability over the long term that is consistent with subtexts on political equilibrium she notes in the work of early political analysts such as Aristotle, Machiavelli, Locke, Burke, and, later, Tocqueville. Ray dispels the widely accepted myth that Americans are increasingly apathetic and withdrawn from common interests. The evidence reveals a persistence of long-standing public spiritedness, despite the fact that individuals use wider discretion in deciding if and how to attach to community and despite a historical lack of enthusiasm for performing civic duties in lieu of more pleasurable leisure activity. This public-spiritedness continues to reflect embedded religious-cultural values that disproportionately influence how and when people dedicate time and money to associational life. U. S. civil society has grown more inclusive and democratic as Americans venture, at growing rates, across differences in perspective, ideas, beliefs, and experience to form diverse networks of interest, association, and community. No longer confined to an immediate or local area, the social space of Americans now incorporates national, international, and cyber-spatial dimensions. Social connectedness is extensive, due to the expansion of social space and the multiplication of weak social ties that transcend geographic and spatial boundaries. Ray's theoretical model gives form and coherence to her massive compilation of quantitative and qualitative data. She uses this to improve the visibility of civil society, an institution essential to democracy itself. This volume provides the basis for a systematic evaluation of a major American institution as well as a framework for comparison with other Western democracies.

List of Tables
List of Figures
Acknowledgments
Foreword Francis Fukuyama
1. Democratic Civil Society: What is It and Why is It Important?
2. Organized Voluntary Association: Pervasive and Elastic
3. Attachment and Involvement: How Much and What Kind?
4. Association: Diversity and Transcending Difference
5. Communication: Circulation, Constraints, and Connections
6. Autonomy: Transformed, Tentative, and Tenacious
7. Mediation: Necessary Nurturance of Democratic Tensions
8. The Evolution of U.S. Civil Society: Gain, Risk, and Resilience
Bibliography
Index