Charge! Hurrah! Hurrah!
A Life of Cardigan of Balaclava 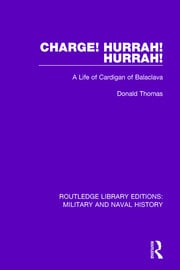 Charge! Hurrah! Hurrah!: A Life of Cardigan of Balaclava

For James Thomas Brudenell, 7th Earl of Cardigan, leading the Light Brigade at Balaclava was but one incident in a life of sensation and notoriety. Donald Thomas’s biography, originally published in 1977, and based on new material when originally published, shows this most controversial Victorian against a panorama of regimental intrigue and aristocratic luxury.

Dismissed from the army for ‘revolting’ conduct, Cardigan bought the command of the 11th Hussars (the ‘Cherry Bums’) for £40,000 a few years later. Regimental rivalries led to the ‘Black Bottle’ scandal of 1840 and to a duel in which he shot a brother officer. Charged with attempted murder, Cardigan was the only Victorian peer to be tried by the House of Lords. Nonetheless, his seductions of other men’s wives rivalled his regimental misdemeanours in press reports. He was jeered int he streets, hissed at the theatre and burnt in effigy.

It took the glory and the folly of Balaclava to turn ‘this plague-spot of the British army’ into ‘the most popular soldier in England’. Greeted everywhere by cheering crowds, their new hero fought duels and libel actions against those who denied his bravery before the Russian guns.

For all his misbehaviour, Cardigan remains warm-blooded, generous, impulsive and courageous, as well as obstinate, proud and sometimes ridiculous. Hated by numerous men, and adored by many women, his elopement with the beautiful Adeline Horsey de Horsey was a triumph of his old age.