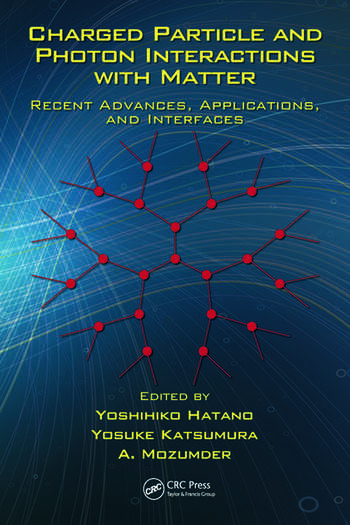 Building on Mozumder’s and Hatano’s Charged Particle and Photon Interactions with Matter: Chemical, Physicochemical, and Biological Consequences with Applications (CRC Press, 2004), Charged Particle and Photon Interactions with Matter: Recent Advances, Applications, and Interfaces expands upon the scientific contents of the previous volume by covering state-of-the-art advances, novel applications, and future perspectives. It focuses on relatively direct applications used mainly in radiation research fields as well as the interface between radiation research and other fields.

The book first explores the latest studies on primary processes (the physical stage), particularly on the energy deposition spectra and oscillator strength distributions of molecules interacting with charged particles and photons. Other studies discussed include the use of synchrotron radiation in W-value studies and the progress achieved with positrons and muons interacting with matter. It then introduces new theoretical studies on the physicochemical and chemical stages that describe the behavior of electrons in liquid hydrocarbons and the high-LET radiolysis of liquid water.

The book also presents new experimental research on the physicochemical and chemical stages with specific characteristics of matter or specific experimental conditions, before covering new experimental studies on the biological stage. The last set of chapters focuses on applications in health physics and cancer therapy, applications to polymers, the applications and interface formation in space science and technology, and applications for the research and development of radiation detectors, environmental conservation, plant breeding, and nuclear engineering.

Edited by preeminent scientists and with contributions from an esteemed group of international experts, this volume advances the field by offering greater insight into how charged particles and photons interact with matter. Bringing together topics across a spectrum of scientific and technological areas, it provides clear explanations of the dynamic processes involved in and applications of interface formation.

Yoshihiko Hatano is director general of the Advanced Science Research Center at the Japan Atomic Energy Agency and professor emeritus at the Tokyo Institute of Technology. Dr. Hatano is the author or coauthor of more than 280 refereed journal articles, scientific papers, and books. His research interests include primary and fundamental processes in charged particle and photon interactions with matter, spectroscopy and dynamics of superexcited states in photonic or electronic collisions with molecules, electron attachment and recombination, and collisional de-excitation of excited rare gas atoms.

Yosuke Katsumura is a professor at the University of Tokyo and a group leader of Basic Radiation Research at the Japan Atomic Energy Agency. Dr. Katsumura has published more than 220 articles in peer-reviewed journals and books. His recent interests include radiolysis of supercritical water, ultrafast pulse radiolysis, and heavy ion beam radiolysis of water.

Asokendu Mozumder is research professor emeritus in the Radiation Laboratory and Department of Chemistry at the University of Notre Dame. Dr. Mozumder is the author or coauthor of nearly 125 articles in refereed journals. His research interests include theoretical aspects of radiation chemistry, early stages of radiolysis, theories of electron localization and trapping, and free-ion yield and mobility in liquid hydrocarbons.