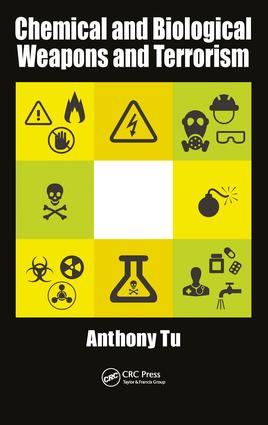 Chemical and Biological Weapons and Terrorism

Written by the world’s leading expert on the Tokyo sarin attacks, Chemical and Biological Weapons and Terrorism is a comprehensive examination of the use, detection, and prevention of chemical and biological attacks.

Divided in two parts, one devoted to chemical and the other biological weapons, this book emphasizes defense, decontamination, detection, treatment, mechanism of toxic action, and pathological effects in the case of each. Covering a diverse range of substances, chapters draw on detailed case studies on the US anthrax attacks, the Tokyo sarin gas attacks, as well as an entire chapter devoted to the Iran-Iraq War co-authored with Dr. Sayid Abbas Foroutan, a former Iranian military surgeon who actively participated in the treatment of Iranian soldiers suffering from gas poisoning.

Featuring over 100 unique photographs and detailed chemical structures, Chemical and Biological Weapons and Terrorism is essential reading for counterterrorism experts, first responders and medical professionals, security consultants and military personnel seeking to expand their knowledge of preventative strategies. The book also will serve as a great resource for students in homeland security, public administration, and criminal justice programs.

5. Example of Bio-terrorism: Anthrax Terrorism in the U.S.

6. Detection and Identification of Chemical and Biological Weapons

7. Protection from Chemical and Biological Agents

8. Decontamination of Chemical and Biological Weapons and Terrorism

10. How to Deal with Terrorism

Dr. Anthony Tu is the world’s leading expert on the Tokyo sarin attacks and is much sought after globally for his insight on chemical and biological weapons and weapons of mass destruction. He has written, co-authored, and edited 40 books in chemistry and weapons studies in his decades-long career. Dr. Tu also played an integral role in the investigation of the sarin attacks, the first chemical terrorism attack on record, pivoting the entire direction of the investigation with his knowledge of how the chemical weapon would leave deposits on surrounding soil.