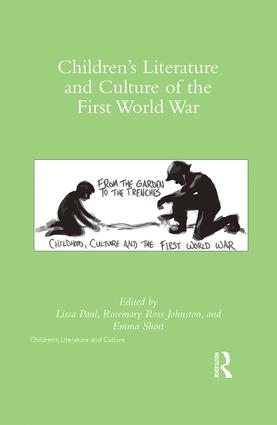 Children's Literature and Culture of the First World War

Because all wars in the twenty-first century are potentially global wars, the centenary of the first global war is the occasion for reflection. This volume offers an unprecedented account of the lives, stories, letters, games, schools, institutions (such as the Boy Scouts and YMCA), and toys of children in Europe, North America, and the Global South during the First World War and surrounding years. By engaging with developments in Children’s Literature, War Studies, and Education, and mining newly available archival resources (including letters written by children), the contributors to this volume demonstrate how perceptions of childhood changed in the period. Children who had been constructed as Romantic innocents playing safely in secure gardens were transformed into socially responsible children actively committing themselves to the war effort. In order to foreground cross-cultural connections across what had been perceived as ‘enemy’ lines, perspectives on German, American, British, Australian, and Canadian children’s literature and culture are situated so that they work in conversation with each other. The multidisciplinary, multinational range of contributors to this volume make it distinctive and a particularly valuable contribution to emerging studies on the impact of war on the lives of children.

"The contributions to this impressive collection of essays address the role of literature, children’s material culture, education and institutions in shaping children’s perspectives, attitudes and morals during the Great War. (…) Children’s Literature and Culture of the First World War, a volume that certainly deserves the serious attention of children’s literature scholars." - Anja Müller, University of Siegen, Germany

"Ultimately, this timely and detailed study provides an important example of why children and childhood should be foregrounded in the study of war, and the insights that cna be gained by studying these themes in a transnational context." - Ashley Henrickson, Jeunesse, 9.2, 2017

Rosemary Johnston is Professor of Education and Culture at the University of Technology, Sydney, Australia.

Lissa Paul is Professor in the Faculty of Education at Brock University, Canada.

Emma Short is Research Associate in the School of English Literature, Language, and Linguistics at Newcastle University, UK.