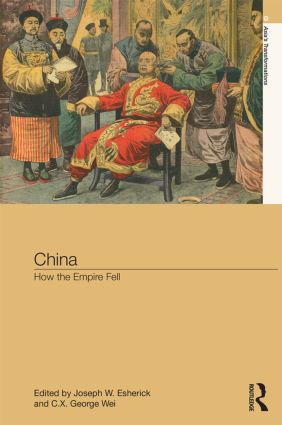 How the Empire Fell, 1st Edition

The Qing dynasty was China’s last, and it created an empire of unprecedented size and prosperity. However in 1911 the empire collapsed within a few short months, and China embarked on a revolutionary course that lasted through most of the twentieth century. The 1911 Revolution ended two millennia of imperial rule and established the Republic of China, but dissatisfaction with the early republic fuelled further revolutionary movements, each intended to be more thoroughgoing than the last, from the National Revolution of the 1920s, to the Communist Revolution, and finally the Cultural Revolution.

On the centenary of the 1911 Revolution, Chinese scholars debated the causes and significance of the empire’s collapse, and this book presents twelve of the most important contributions. Rather than focusing on Sun Yat-sen’s relatively weak and divided revolutionary movement, as much previous scholarship has, these studies examine the internal dynamics of political and socio-economic change in China. The chapters reveal how reforms in education, army organization, and constitutional rule created new social forces and political movements that undermined dynastic legitimacy within China and on its frontiers. Through detailed analyses, using new archival, memoir, diary, and newspaper sources, the authors cast new light on the sudden collapse of an empire that many thought was at last embarked on a road to reform and national rejuvenation.

China: How the Empire Fell

will be of huge interest to students and scholars of modern Chinese history as well as those of contemporary China.

"Although hints about current political debates are intriguing, the volume will be useful above all to graduate students and professors of modem Chinese history seeking an introduction to current Chinese scholarship on the Revolution of 1911. Summing Up: Highly Recommended" – K.E Stapleton, State University of New York in CHOICE

is Professor and Head of the Department of History at the University of Macau.