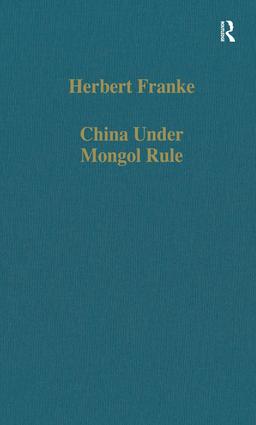 From c. 1215 to 1368 China was part of the world empire of the Mongols, and during this period underwent many changes as the country was opened up to external influences - demographic, linguistic, religious, socio-economic. The studies by Herbert Franke collected here examine different aspects of this process, dealing with the polyethnicity of China under a dynasty of conquest and the cultural and political roles of non-Chinese, as well as the Chinese reaction, and antagonism to the situation. Of the articles, the first focus on source material, then on the position of the Mongol rulers, tracing their transformation from tribal chieftains into universal emperors, and gods. The following pieces look at cultural contacts, including the author's well-known survey of Sino-Western encounters, while the final ones use biographical studies to illuminate different aspects of YÃ¼an China.

'The articles collected in China under Mongol Rule should serve as a paradigm for younger generations of scholars to emulate. The high standard of scholarship, the depth and versatility of linguistic and philological expertise, and the ability to impart a genuine ’feel’ for the era when China was ruled by the Mongols all combine to make this volume a "must-have" item for those who teach or conduct research on this period of history.' Mongolian Studies, Vol. XX

Contents: Preface; Chinese historiography under Mongol rule: the role of history in acculturation; Some remarks on Yang YÃ¼ and his Shan-chÃ¼ hsin-hua; Some sinological remarks on RasÃ®d ad-dÃ®n’s history of China; From tribal chieftain to universal emperor and god: The legitimation of the YÃ¼an Dynasty; Could the Mongol emperors read and write Chinese?; Women under the dynasties of conquest; Sino-Western contacts under the Mongol empire; Tibetans in YÃ¼an China; The exploration of the Yellow river sources under emperor Qubilai in 1281; Wang YÃ¼n (1227-1304): a transmitter of Chinese values; Sha-lo-pa (1259-1314), a Tangut Buddhist monk in YÃ¼an China; Tan-pa, a Tibetan Lama at the court of the Great Khans; A Sino-Uighur family portrait: notes on a woodcut from Turfan; Index.