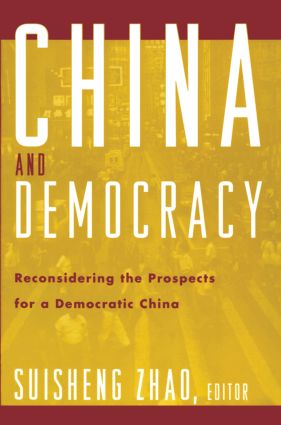 Reconsidering the Prospects for a Democratic China, 1st Edition

This timely collection brings together many well-known scholars to systematically explore China's current government and assess that transition toward democracy. The contributors seek to bridge the gap between normative theories of democracy and empirical studies of China's political development by providing a comprehensive overview of China's domestic history, economy, and public political ideologies.

"Suisheng Zhao successfully puts together a group of scholars to address China's democratic prospects in an unfamiliar yet provocative way. Current academic writings focus primarily on the possibility of China's transforming into a democracy, or on the general and the specific condictions through which China will eventually qualify to become a democracy. Zhao's book is different because it provides some Chinese perspectives that are rarely found in the literature elsewhere." -- The China Review

"This delicately researched and deftly woven volume offers intriguing, in-depth analyses in reconsideration of China's democratization and insiders' insights on how the nation could be incorporated into the modern world system. -Choice, May 2001, Vol 38, No 09."