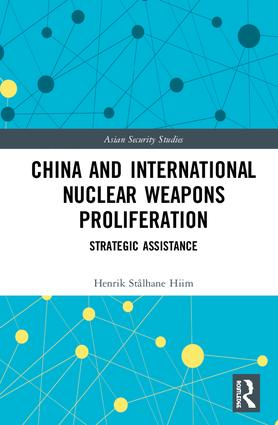 This book explores China’s approach to the nuclear programs in Pakistan, Iran, and North Korea.

A major power with access to nuclear technology, China has a significant impact on international nuclear weapons proliferation, but its attitude towards the spread of the bomb has been inconsistent. China’s mixed record raises a broader question: why, when and how do states support potential nuclear proliferators? This book develops a framework for analyzing such questions, by putting forth three factors that are likely to determine a state’s policy: (1) the risk of changes in the nuclear status or military doctrines of competitors; (2) the recipient’s status and strategic value; and (3) the extent of pressure from third parties to halt nuclear assistance. It then demonstrates how these factors help explain China’s policies towards Pakistan, Iran, and North Korea. Overall, the book finds that China has been a selective and strategic supporter of nuclear proliferators. While nuclear proliferation is a security challenge to China in some settings, in others, it wants to help its friends build the bomb.

This book will be of much interest to students of international security, nuclear proliferation, Chinese foreign policy and International Relations in general.

3. Friends with Nuclear Benefits: China and the Pakistani Bomb

5. Give Them Shelter: China and North Korean Nuclear Brinkmanship

6. Extending the Argument: Minor and Non-Chinese Cases of Nuclear Assistance

7. Conclusion: A Rising China and the Future of Nuclear Proliferation

Few regions of the world are fraught with as many security questions as Asia. Within this region it is possible to study great power rivalries, irredentist conflicts, nuclear and ballistic missile proliferation, secessionist movements, ethnoreligious conflicts and inter-state wars. This series publishes the best possible scholarship on the security issues affecting the region, and includes detailed empirical studies, theoretically oriented case studies and policy-relevant analyses as well as more general works.