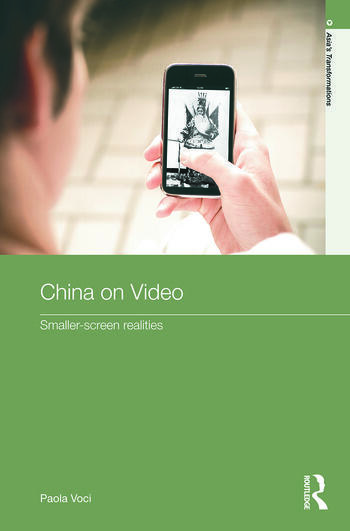 China On Video is the first in-depth study that examines smaller-screen realities and the important role they play not only in the fast-changing Chinese mediascape, but also more broadly in the practice of experimental and non-mainstream cinema. At the crossroads of several disciplines—film, media, new media, media anthropology, visual arts, contemporary China area studies, and cultural studies--this book reveals the existence of a creative, humorous, but also socially and politically critical "China on video", which locates itself outside of the intellectual discourse surrounding both auteur cinema and digital art.

By describing smaller-screen movies, moviemaking and viewing as light realities, Voci points to their "insignificant" weight in terms of production costs, distribution size, profit gains, intellectual or artistic ambitions, but also their deep meaning in defining an alternative way of seeing and understanding the world. The author proposes that lightness is a concept that can usefully be deployed to describe the moving image, beyond the specificity of recent new media developments and which can, in fact, help us rethink previous cinematic practices in broad terms both spatially and temporally.

Paola Voci is a senior lecturer at the University of Otago. Her area of research combines Chinese and film studies. She has published on Chinese cinema, documentary and other non-fiction film/videomaking in contemporary China and the media of the Chinese diaspora.

"China on Video is one of the most exciting books I have read in a long time. It redefines Chinese cinema. Paola Voci introduces and analyses the little-known, sometimes edgy, often funny, and always alternative world of Chinese satirical clips, online videos, independent documentaries, mobile phone films, and animations. The burgeoning world she depicts is more diverse, more vibrant, and less easily controlled than the old focus on Chinese feature films has led us to believe." Chris Berry, Goldsmith, University of London, UK

'The modest, prosaic title of this book understates its important contribution to Chinese studies and perhaps more significantly to the field of film studies. Paola Voci’s considerable understanding of film theory is aptly applied to her more versatile renderings of “film” on video and the greater possibilities afforded to filmmakers through the more portable and accessible technologies of the digital era... This remarkably informative book’s greatest importance lies in its temporal place as the first major work to examine what is merely the beginning of mobile film technologies as a feature of the Chinese media system. As China continues to grant its citizens freedoms that they once only imagined, Voci shows us how this convergence of the technical, the political and the cultural allow for a more individual-centered society to flourish.' - Peter C. Pugsley, The University of Adelaide; The China Journal (July 2013).