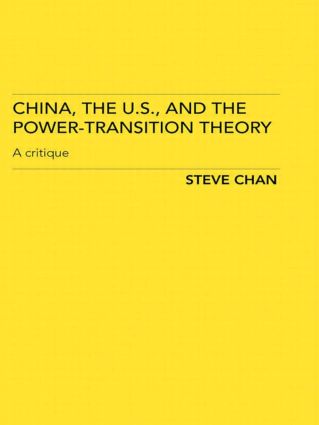 China, the US and the Power-Transition Theory

China’s recent growth has called attention to the power-transition theory, which contends that the danger of a major war is the greatest when a rising dissatisfied challenger threatens to overtake a declining satisfied hegemon.

Steve Chan questions this prevailing view by analyzing the extent of ongoing power shifts among the leading powers, exploring the portents for their future growth, and seeking indicators of their relative commitment to the existing international order. To better understand the strategic motivations of ascending and declining states, insights are drawn from prospect theory and past episodes of peaceful and violent transition (such as the end of the Cold War and the outbreak of the First and Second World Wars). He concludes that China is unlikely to instigate a confrontation with the US, and that whilst military conflict over the Taiwan Strait is possible, this is more likely to be due to China’s inability to prevent US involvement than its willingness to provoke the US.

This book places China in a comparative and historical context, in which inquiry is informed by the experiences of other major powers and pertinent theories in international relations, such as those on extended deterrence, preventive war, and democratic peace. Its comparative and theoretical orientation and its contrarian perspective will be of great interest not only to students and scholars of international relations and Chinese politics, but also to policy makers and professionals.

'In this wide ranging, well researched and clearly written book, University of Colorado Political Scientist Steve Chan takes critical aim at what he sees as flawed elements in the prevailing academic and policy discourse about this topic… The message of the book is important for a wide audience of practitioners, specialists and students.' - Robert Sutter, East Asia: An International Quarterly, Vol. 24, 2007

'Steven Chan is to be commended for producing one of the most extensive treatments of power transition theory as it applies to China and to Asian Security politics' - William Tow, The Australian National University, The China Journal, No. 60

'Chan has written a carefully circumspect book about a global issue of the utmost importance. This book is like a crash course in both international relations theory and Sino-American security relations. It is highly recommended to anybody who is interested in either China or peace' - China Perspectives, January 2009

1. Introduction: The Basic Arguments 2. Power Scores and the Identity of Central Contenders 3. Revisionist Impulse and the Incumbent’s Strategic Selection 4. Imperial Overstretch and Loss Aversion as Sources of War 5. Preventive War and Alternative Responses to Decline 6. Appeasement and the Distribution of Benefits 7. Conundra of Containment and Engagement 8. Managing the Hegemon: In Lieu of Frontal Confrontation 9. Extended Deterrence and the Logic of Selection 10. Conclusion: Theoretical and Policy Implications

Steve Chan is currently the department chair and professor of political science at the University of Colorado, Boulder.