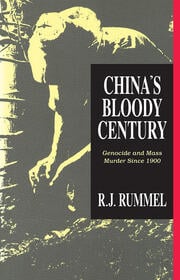 Except for Soviet citizens, no people in this century have endured so much mass killing as have the Chinese. They have been murdered by rebels conniving with their own rulers, and then, after the defeat in war of the imperial dynasty, by soldiers of other lands. They have been killed by warlords who ruled one part of China or another. They have been executed by Nationalists or Communists because they had the wrong beliefs or attitudes or were simply in the wrong place at the wrong time. In China's Bloody Century, R.J. Rummel's careful estimate of the total number of killings exceeds 5 million.

How do we explain such killings, crossing ideological bounds and political conditions? According to Rummel, the one constant factor in all the Chinese mass murder, as it was in the Soviet Union and Nazi Germany, is arbitrary power. It was the factor that united warlords, Nationalists, Communists, and foreign armies. The author argues that whenever such undisciplined power is centralized and unchecked, the possibility exists that it will be used at the whim of dictators to kill for their own ends, whether the aim is ethnic-racial purity, national unity, development, or utopia.

The book presents successive periods in modern Chinese history, with each chapter divided into three parts. Rummel first relates the history of the period within which the nature and the amount of killings are presented. He then provides a detailed statistical table giving the basic estimates with their sources and qualifications. The final part offers an appendix that explains and elaborates the statistical computations and estimates.

While estimates are available in the literature on the number of Chinese killed in Communist land reform, or in Tibet, or by the Nationalists in one military campaign or another, until this book no one has tried to systematically accumulate, organize, add up, and analyze these diverse killings for all of China's governments in this century. For the first time in one place, hundreds of published estimates of Chinese genocide and mass murder are listed with sources, analyzed, and their historical context presented. This book will be of central interest to Sinologists, Sovietologists, and those interested in comparative politics and society.