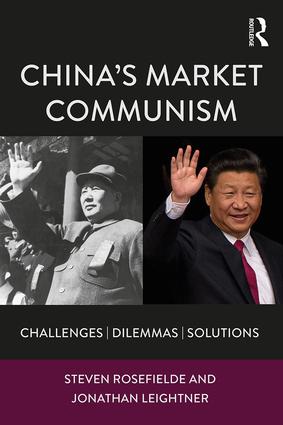 China’s Market Communism guides readers step by step up the ladder of China’s reforms and transformational possibilities to a full understanding of Beijing’s communist and post-communist options by investigating the lessons that Xi can learn from Mao, Adam Smith and inclusive economic theory. The book sharply distinguishes what can be immediately accomplished from the road that must be traversed to better futures.

'This is an excellent book for people who are interested in the future of China. It is authored by two Westerners who have a deep knowledge of China’s political structure, history and economy, and who have a wide basis of knowledge of other countries in the world which provides a context for deeper understanding. This book identifies and describes the alternative economic, social and political paths open to China in the next several decades. It makes no recommendations, but shows what are the opportunities and the risks. There is no utopian illusion here – every choice is shown to have advantages and short-comings. This is a much-needed comprehensive, objective and dispassionate study of China’s future.'— Professor Daniel Quinn Mills, Harvard Business School

'As one more insightful book from Professor Rosefielde, China’s Market Communism provides not merely a retrospect of the transformation that has taken place in the economic system of the post- 1949 China; by highlighting explicitly the disparities between each model, it also argues in a comprehensive way their implications. Indeed, Chinese leaders including Xi Jinping all have their ideals to pursue, and quite naturally, they have both developed a roadmap which they think is the best for the country. Nevertheless, no matter how justified their choices are, only time is the unmistakable proof. Understanding the finiteness of human beings, this book does not intend to point out the "best alternative" for China; instead, it displays several important perspectives for readers to contemplate, which I believe can help trigger more fresh and in-depth thinking over China’s economy in the future.' — Chenyi Yu, Lecturer, Zhejiang Wanli University of Ningbo, China

Steven Rosefielde is Professor of Economics at the University of North Carolina, Chapel Hill and a member of the Russian Academy of Natural Sciences. One of the world's leading experts in Soviet/Russian Studies, Comparative Economic Systems and International Security, he is the author of numerous books including Asian Economic Systems (2013).

teaches at Augusta University in the United States and Chulalongkorn University in Thailand. Johns Hopkins University hired him to teach at the Hopkins-Nanjing Center in China for 2008–2010. His publications include articles on China’s trade, exchange rates, foreign reserves, fiscal policy and land rights.