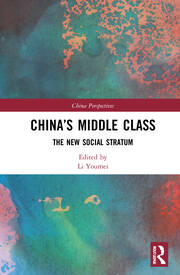 This book is a collection of empirical studies on China’s middle class from top-ranking Chinese sociologists, discussing this newly identified social stratum with regard to the basic concept and scope of the group, its functions, formation, identity, consumption, behavior patterns and value system.

As the first study of its kind, the analysis of most chapters is based on a rich body of empirical data gathered from rigorous large-scale surveys designed specifically for the Chinese middle class across megacities including Beijing, Shanghai and Guangzhou. The book traces the complex and dynamic formation process of China’s middle class from different perspectives while dealing with issues of social concern such as "rigid social stratification". The findings shed light on the underlying logic of structural change in Chinese society over several recent decades, with significant policy implications.

The book will attract sociologists, students and policymakers interested in social structure, social transformation and middle-income groups in China.

Part 1: Concept, Function and Scope of the Middle Class

1. The Emergence of the Concept of the Middle-income Group and its Impact on the Development of Chinese Society

2. “White Collar” Workers in the Social Structure and their Function in Society: Taking Post-1980’s Shanghai as an Example

3. Occupational Characteristics of the Middle-income Group in China’s Megacities

Part 2: Formation and Identity of the Middle Class

5. Housing and the Class Identity of Urban Residents: Based on empirical research conducted in Beijing, Shanghai and Guangzhou

6. The Social Composition of Private Business Owners in China: Class and Cohort Differences

7. A Study on the Income Gap between Urban Household Registrants and Rural Migrant Workers from the Perspective of Occupational Stratification

10. From Emphasizing “Education” to Emphasizing “Supply” : Research Framework and Empirical Analysis of Sustainable Consumption in the Urban Middle Class

Part 4: Behavior and Value System of the Middle Class

12. A Study on the Sense of National Identity among the Middle Class in China’s Megacities: An Analysis of Tourist Behavior

13. Measurement and Comparative Study of Political Attitude of the New Social Class: Based on Survey Data from Six Provinces and Cities

14. The Fertility Desire of the Middle Class: An Investigation in Beijing, Guangzhou and Shanghai

is a professor and doctoral supervisor at Shanghai University, and the president of the Chinese Sociological Association. Her main research interests are organizational sociology and social governance transformation.