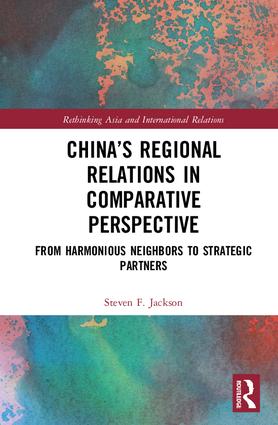 China’s relations with its neighbors have evolved since 1949, and in the 21st century many scholars argue that China’s rising power has led it to be increasingly domineering over those smaller countries in Northeast, Southeast, Central, and South Asia. The evolution of China’s regional relations needs to be examined comprehensively, since China counts twenty-seven countries as its "neighbors" large and small. While China’s official policy toward all of these countries is to treat them as "good neighbors" and "partners," some of these relationships have been spectacularly deteriorating, while others have been quietly improving over the last two decades.

Jackson takes a comparative foreign policy approach, and compares China’s status as a regional hegemon with the United States, Russia, India, Brazil, South Africa and Nigeria. The result is a broader theory as to why regional powers are sometimes intimidating and at other times accommodating.

An important contribution to studies on China, this book will prove useful to scholars and students in Chinese and Asian foreign policy, comparative foreign policy, and international relations.

"China’s Regional Relations in Comparative Perspective makes an interesting contribution to the literature on Regional Powers in world politics. Among its strengths are its effort to develop insights from the comparative analysis of Regional Powers’ policies, and its focus on change in Regional Powers’ strategies. The systematic study of China’s approach to all of Asia’s sub-regions allows for new insights into the regional dimension of China’s foreign policy." - Sandra Destradi, Helmut Schmidt University and GIGA German Institute of Global and Area Studies, Germany

"This book is a systemic, balanced, and sophisticated study of China’s regional relations from historical and comparative lenses. When most media and pundits are talking about the assertiveness of China’s foreign policy in recent years, particularly in its periphery, the author argues convincingly that while China‘s regional diplomacy is not flawless, it is actually no more aggressive and less benign than other major hegemons such as U.S., Russia, and India in their backyard. A timely and much needed addition to the literature on the subject for scholars and students alike in Chinese foreign relations." - Jianwei Wang，Professor and Director, Institute of Global and Public Affairs, University of Macau

"Jackson provides a rich and nuanced analysis that contextualizes Chinese behavior toward its neighbors by comparing it to other regional hegemons."- Srinivasan Sitaraman, Journal of Chinese Political Science

Chapter 2 Regional Hegemons and Their Behavior

Chapter 6 China and Northeast Asia in the 21st Century

Chapter 7 China and Southeast Asia in the 21st Century

Chapter 8 China and Central Asia in the 21st Century

Chapter 9 China and South Asia in the 21st Century

Steven F. Jackson is professor of political science. After receiving his bachelor’s degree in International Relations from Stanford University in 1981, he taught English in Xi’an China from 1981-83. He received his Ph.D. from the University of Michigan and joined the faculty at Indiana University of Pennsylvania in 1994. His area of specialization is in Chinese foreign relations, and in particular in particular China’s regional relationships, such as with East Asia and Africa.