China's Relations with the Gulf Monarchies 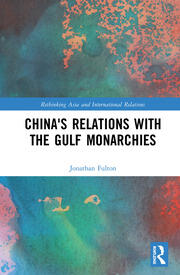 China's Relations with the Gulf Monarchies

As China’s international political role grows, its relations with states outside of its traditional sphere of interests is evolving. This is certainly the case of the Gulf monarchies of Bahrain, Kuwait, Oman, Qatar, Saudi Arabia, and the United Arab Emirates, which together comprise the Gulf Cooperation Council (GCC). China’s levels of interdependence with these states has increased dramatically in recent years, spanning a wide range of interests. What motivating factors explain the Chinese leadership’s decision to forge closer ties to the GCC? Why have GCC leaders developed closer ties to China, and what kind of role can China be expected to play in the region as levels of interdependence intensify?

This book uses neoclassical realism to analyse the evolution of Sino-GCC relations. Examining the pressures that shaped China’s policy toward the Gulf monarchies, it demonstrates that systemic considerations have been predominant since 1949, yet domestic political considerations were also always an important consideration. Relations are examined across diplomatic and political interactions, trade and investment, infrastructure and construction projects, people-to-people exchanges, and military and security cooperation.

This book will appeal to scholars in the fields of International Relations and International Political Economy, as well as area specialists on China, the Gulf, the Gulf Monarchies, and those working on foreign policy issues.

Jonathan Fulton is an Assistant Professor of Political Science in the College of Humanities and Social Sciences at Zayed University, in Abu Dhabi, United Arab Emirates, where he researches China – Middle East relations, Chinese foreign policy, the global strategic implications of the Belt and Road Initiative, and international relations of the Gulf region. He has written several articles and chapters on China-Gulf relations and is co-editor of External Powers and the Gulf Monarchies (Routledge, 2019).