Chinese Big Business in Indonesia
The State of Capital 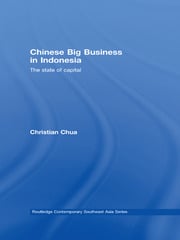 Chinese Big Business in Indonesia: The State of Capital

inate Indonesia's private sector. Contrary to all expectations, most of the

major capitalist groups, though damaged considerably by the Asian Crisis,

managed to cope with the ensuing monumental political and economic

changes, and now thrive again albeit within a new democratic environment.

In this book Christian Chua assesses the state of capital before, during,

changing relationships between business and the state in Indonesia. Using a

distinct perspective that combines cultural and structural approaches on

Chinese big business with exclusive material derived from interviews with

some of Indonesiaâ€™s major business leaders, Chua identifies the strategies

employed by tycoons to adapt their corporations to the post-authoritarian

regime and provides a unique insight into how state-business relationships

in Indonesia have evolved since the crisis.

Indonesia since the fall of Soeharto, and will be of interest to graduate

1. Introduction: Capital and the State  2. Theoretical Framework: Power Configurations of State and Capital  3. Limited Capitalists: Chinese Big Business and the State Before 1998  4. Capital in Crisis: The Conglomerates and the End of the New Order  5. Capital’s Reaction: The Survival of the Conglomerates  6. Capital Unlimited: Towards a New Accommodation  7. Conclusion: The State of Capital

Christian Chua works for Deutsche Bank, Germany, and lectures at the Humboldt University Berlin and the University of Frankfurt.