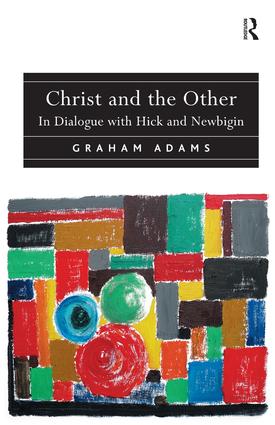 Christ and the Other

In Dialogue with Hick and Newbigin, 1st Edition

How should we relate to 'others' - those within a particular tradition, those of different traditions, and those who are oppressed? In the light of these anxieties, and building on the work of Andrew Shanks, this book offers a vision of Christ as 'the Shaken One', rooted in community with others. Shaped through dialogue with the theologies of John Hick and Lesslie Newbigin, Adams urges Christian communities to attend more deeply to the demands of ecumenical, dialogical and political theologies, to embody an ever greater 'solidarity of others' - a quality of community better demonstrating Christlike 'other-regard'.

'Adams reviews the Christological thinking of two well-known figureheads of the debate on theological pluralism (John Hick) and Christian exclusivism (Lesslie Newbigin) with empathy, but not without criticism. In their ambition to universalize their particular visions of Jesus/Christ, both show in fact some sectarian tendencies. Very different, however, from the partisanship that characterizes both camps of the discussion, Adams enters into a theological conversation with both of them - a conversation, interestingly, that Hick and Newbigin themselves, though being active at the same time and in the same city, never had. The outcome is a Christology which is serious about decolonizing universalist concepts such as "truth" and "humanity", having open membranes towards the otherness around it and, inevitably, is resistant to the temptation of closure. Like all good theology, Adams' theological proposal does not lead us to God but to ourselves and to those around us. ' Werner Ustorf, University of Birmingham, UK '[Adams] writes in a lively and interesting way.' Theological Book Review ’Graham Adams has written a thoughtful and engaging book on approaches to the question of religious and theological pluralism… The book’s argument is culturally and theologically complex and impossible to do justice to in a short review, but it is both well sustained and thought-provoking…’ Theology '… we find here a sophisticated exposition of an ethically-concerned pluralist stance which seeks to be in dialogue with ecclesial tradition and those beyond liberal Christianity… I believe that Adams should be applauded for the effort, and I am sure that most readers will find great benefit from reading this work.' Modern Believing

Having first graduated in Law, Graham Adams trained for Congregational ministry, studying Contextual Theology at Northern College, part of the ecumenical partnership at Luther King House (LKH) in Manchester. He has been in ministry since 2002 with Lees Street Congregational Church, in an inner-city ward of Manchester. Several experiences with the World Church, not least a Study Tour of Israel/Palestine, have sharpened his interest in religious diversity and political engagement. Graham undertook research with the University of Leeds, graduating with a PhD in 2008. He has worked in theological education since 2003, at LKH, on the Congregational Federation's distance-learning Foundation Degree in Practical Theology, recently devising its BA level, and now has been appointed as Tutor in World Christianity and World Faiths, Northern College.