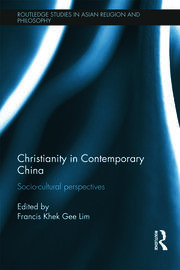 Christianity is one of the fastest growing religions in China. Despite its long history in China and its significant indigenization or intertwinement with Chinese society and culture, Christianity continues to generate suspicion among political elites and intense debates among broader communities within China.

This unique book applies socio-cultural methods in the study of contemporary Christianity. Through a wide range of empirical analyses of the complex and highly diverse experience of Christianity in contemporary China, it examines the fraught processes by which various forms and practices of Christianity interact with the Chinese social, political and cultural spheres. Contributions by top scholars in the field are structured in the following sections: Enchantment, Nation and History, Civil Society, and Negotiating Boundaries.

This book offers a major contribution to the field and provides a timely, wide-ranging assessment of Christianity in Contemporary China.

Francis Khek Gee Lim teaches in the Division of Sociology at Nanyang Technological University, Singapore. His publications include Imagining the Good Life: Negotiating Culture and Development in Nepal Himalaya; Mediating Piety: Technology and Religion in contemporary Asia (editor) and Christianity and the State in Asia (co-editor).