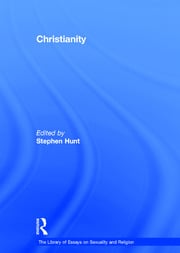 For two millennia Christianity has embraced fairly consistent views of human sexuality. Today, there exist more varied outlooks on the subject. This volume on Christianity in the The Library of Essays on Sexuality and Religion series overviews the contrasting Christian perceptions of sexuality. Part 1 includes a number of previously published articles that are theological in nature and present biblical interpretations of sexuality. Here, several Christian voices are permitted to speak from their varied perspectives, both conservative and liberal. Part 2 features contributions focusing on the Christian tradition of celibacy and asceticism. Part 3 surveys scholarly work emphasising the relationship between sexuality, gender and patriarchy. Part 4 offers academic interpretations of Christian expressions of sexuality through the mediums of worship, ritual and the sacraments. The final part peruses contemporary contestations of conventional Christian views. This is undertaken by presenting articles examining views of gay sexuality, assisted human reproduction and priestly celibacy.

Contents: Introduction; Part I Theology and Biblical Interpretation: The Bible and sexuality II, Raymond F. Collins; Is the Bible good news for human sexuality? Reflections on method in Biblical interpretation, Stephen C. Barton; Sexuality and the family, Jack Dominian; The Body's Grace, Rowan Williams; Our Lady of the Libido: towards a Marian theology of sexual liberation?, Sian Taylder. Part II Celibacy and Asceticism: Celibacy and free love in early Christianity, Richard M. Price; Antifamilial tendencies in ancient Christianity, Elizabeth A. Clark; The origins of clerical celibacy in the Western Church, Charles A. Frazee; Sexual taboos and social boundaries, Christie Davies; Children of disorder: clerical parentage, illegitimacy, and reform in the Middle Ages, Laura Wertheimer. Part III Gender and Patriarchy: Paul and the sexual mentality of his world, Wolfgang Stegemann; The baptism of Eros, Tina Beattie; Fragments from a journal: reflections on celibacy and the role of women in the Church, Gillian Walker; Deviance, agency, and the social control of women's bodies in a Mennonite community, Linda B. Arthur; Young women, sexuality and Protestant Church community: oppression or empowerment, Sonya Sharma. Part IV Worship, Ritual and Sacraments: The centrality of marriage: homosexuality and the Roman Catholic argument, James P. Hanigan; Human sexuality and eucharistic community: the politics of participation and exclusion, Brian F. Linnane; Ecumenism at a cost: women, ordination, and sexuality: 'disagree with the umpire - take the ball and go home', Leonie B. Liveris; Sweet rapture: subliminal eroticism in contemporary charismatic worship, Martyn Percy; Of gin and lace: sexuality, liturgy and identity among Anglo-Catholics in the mid-20th century, Martin Stringer. Part V Contesting Hegemony and Orthodoxy: 'No more tea, vicar': an exploration of the discourses which inform current debates about sexualities within the Church of England, David Nixon; Negotiating a rel

'... the present volume will bring the scholarly study of sexuality and religion to a wider readership.' Modern Believing '...an excellent overview of issues that frame contemporary debates as well as some of the best new thinking that expands and enriches ecclesial discussions.' Religious Studies Review ’What this volume does so brilliantly is collect together 25 articles and chapters published elsewhere to give an astonishingly broad view of academic thinking in this area.’ Churchman ’...a great assortment of articles for any reader who wishes to be introduced to a wide selection of Christian perspectives on contentious issues dealing with human sexuality.’ Sexuality & Culture