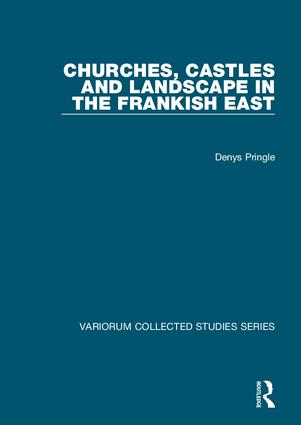 Churches, Castles and Landscape in the Frankish East

The sixteen studies brought together in this book (the second collection of Denys Pringle's articles) are the product of the many years that the author has spent investigating the material evidence for Latin settlement in Syria and Palestine in the twelfth and thirteenth centuries. Focusing on the building remains of churches and castles - and their relationship to the landscape - the themes that it explores include: the influence that such factors as existing local architectural traditions and the need to accommodate visiting pilgrims may have had on the design of Latin churches and religious houses; the architecture of the Cistercian houses in the kingdom of Jerusalem; the insights that the geographical distribution of church buildings gives into the extent of Christian settlement in the 12th and 13th centuries; the development and geographical extent of estates and lordships, including the lordship of Mirabel; the functions of castles in peace and war and the perception of their role by contemporaries; the design and purpose of castle chapels and the role of their chaplains; the evidence for Armenian inhabitants in the castle of Sahyun; and the identification of the spring of the Cresson that features in accounts of the military campaigns of 1187.

Contents: Preface; Church-building in Palestine before the Crusades; Churches and settlement in Crusader Palestine; The planning of some pilgrimage churches in Crusader Palestine; Cistercian houses in the Kingdom of Jerusalem; The fief of Aimery of Franclieu and the estate of the abbey of St Mary of Mount Sion in the territory of Jerusalem; Perceptions of the castle in the Latin East; A castle in the sand: mottes in the Crusader East; Templar castles between Jaffa and Jerusalem; The castles of Ayla (al-‘Aqaba) in the Crusader, Ayyubid and Mamluk periods; The castle and lordship of Mirabel; Il castello di Belmonte e la proprietà ospedaliera della Terra di Emmaus nel regno crociato di Gerusalemme; Qal’at Jiddin: a castle of the Crusader and Ottoman periods in Galilee (with A. Petersen, M. Dow and C. Singer); Castle chapels in the Frankish East; The church of the Holy Sepulchre in the castle of Tripoli (Mont Pèlerin); The chapels in the Byzantine castle of Sahyun (Qal’at Salah al-Din), Syria; The spring of the Cresson in crusading history; Addenda and corrigenda; Index.

Denys Pringle is a Professor in the Cardiff School of History, Archaeology and Religion, Cardiff University, UK.