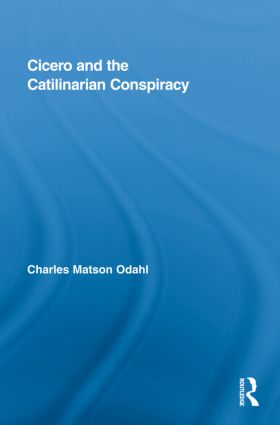 Cicero and the Catilinarian Conspiracy

This story of Cicero and the Catilinarian Conspiracy is set within and offers a case study of the political, military, economic and social crises besetting the late Roman Republic in the era of the "Roman Revolution." The book chronicles the efforts of the defeated radical politician Lucius Sergius Catilina to bring together a group of disaffected Roman nobles and discontented Italian farmers in a conspiracy to overthrow the republican government at Rome and to take control of the Italian peninsula (while the proconsul Pompey the Great and the majority of Roman military units were campaigning in the Near East), and the success of the conservative optimate consul Marcus Tullius Cicero in uncovering the conspiracy, driving Catiline out of Rome, and defeating his revolutionary followers in the capital and in Etruria. The narrative reveals the political corruption, economic problems, and military instability which were leading to the demise of the republican system and the rise of an imperial government in the first century B.C.

The author’s comprehensive knowledge of the ancient sources and the modern scholarship relevant to the last century of the republic has allowed him to offer a detailed and definitive account of this important episode in Roman history. In the same seamless combination of vivid narrative and historical analysis through which he enlightened the Roman imperial age of Constantine, Dr. Odahl here illuminates the Roman republican era of Cicero. This book is a significant publication in Ciceronian studies and will become the standard account of the Catilinarian Conspiracy.

Preface Illustrations Chronology I. The Subject and the Ancient Sources II. The Late Republican Setting III. Catiline and the Radical Politicians IV. Cicero and the Conservative Coalition V. The Conspiracy of Catiline VI. The Victory of Cicero VII. The Aftermath and Modern Echoes Notes Bibliography Index

Charles Matson Odahl obtained his doctorate in Greek, Roman, and Medieval History from the University of California, San Diego (1976). He has served as Professor of Ancient and Medieval History, and Classical and Patristic Latin at Boise State University in Idaho for over thirty years, and has traveled widely through Europe, the Mediterranean Basin and the Near East, teaching at universities in Britain and France, working at museums and archaeological sites, and directing tour-seminars in Italy, Greece and Turkey. His research specialties are Cicero and the late Roman Republic, early Christianity, and Constantine and the early Byzantine Empire. He has published some forty articles and reviews in scholarly journals, and recent books on Early Christian Latin Literature (Chicago, 1993), and Constantine and the Christian Empire (London and New York, 2004 and 2006).