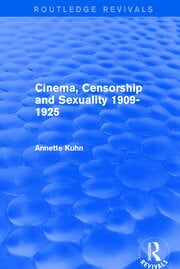 First published in 1988. This book shows how censorship as a set of institutions, practices and discourses was involved in the struggle over the nature of cinema in the early twentieth century. It also reveals the part played in this struggle by other institutions, practices and discourses — for example ‘new’ knowledge about sexuality and organisations devoted to the promotion of public morality. Instead of censorship simply being an act of prohibition by a special institution, this work reveals the issues at work were far more complex and contradictory — opening up critical scrutiny and challenging assumptions. This title will be of interest to students of media and film studies.

General Editor’s Preface; Acknowledgements; Abbreviations; 1. Investigating Film Censorship; Questions of censorship Text, context, apparatus Events and instances; 2. The Birth of Film Censorship in Britain; The question of institutions The cinema industry and the law The British Board of Film Censors and ‘voluntary censorship’; 3. The Morale of the Race and the Amusement of the Public; A Hollywood film in the USA Where Are My Children: Sermon or melodrama? A Hollywood film in Britain: Cinema and social purity The birth of the propaganda film; 4. A Moral Subject; VD propaganda and narrative cinema The VD film, censorship and social purity A moral panic: The place of cinema; 5. Pleasure, Prevention and Productivity; From Married Love to Maisie’s Marriage Popular cinema and a film with a message The productivity of censorship; 6. Sexuality and the cinema; Science and the socio-sexual Social hygiene, social purity and social science The instrumentality of corruption Knowledge, power, cinema; 7. A New Public Sphere; Public and Private A contested Public sphere Cinema as a domain of regulation; 8. Rethinking Film Censorship; Prohibition and production Film censorship and power; Notes and References; Sources Consulted; Films Unpublished documents Contemporary published documents Other published documents: A selection; Index