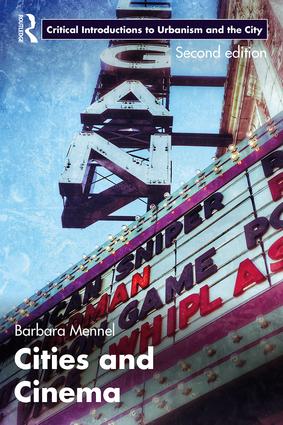 The second edition of Cities and Cinema provides an updated survey of films about cities, from their significance for modernity at the beginning of the twentieth century to the contemporary relationship between virtual reality and urban space. The book demonstrates the importance of the filmic depiction of capitals for national cinemas in the twentieth century and analyzes the transnational transfer of cinematic images surrounding global cities in the twenty-first century.

covers the different facets of the cinematic depiction of cities. It rehearses distinct methodologies and offers a survey of the history of the cinematic city. The book also deepens our understanding of tropes and narrative conventions that shape films about urban settings and that reflect the transformation of cities throughout the twentieth and twenty-first centuries. Beginning with a discussion of the Weimar “street film,” it analyzes how the city film defined modernity. The book outlines the sociological context and the aesthetic features of so-called film noir, made in 1940s Hollywood and depicting Los Angeles. Paris became the site for the development of auteur cinema, which repeatedly depicts characters moving through the city. Tokyo took up noir to signal modern crime. The volume delineates how filmic genres, such as science fiction, comment on the present by imagining future forms of urban living. After analyzing how cinema captures the relationship between sexual identity and urban anonymity, migration and urban space, and marginalized ethnic and sexual identity in ghetto films, the book emphasizes transnational dynamics and global cities in the twenty-first century. Its conclusion points to the increasing virtual mediation of cities with new media.

offers a historical overview of the development of films about cities and a theoretical approach to the intersection of urban studies and film studies. This title is designed as a textbook primarily for second-year undergraduate students in Film/Media studies, Urban studies, as well as Geography and Planning.

Introduction to Section I

1 Modernity and the city film: Berlin

3 Mobility in the city of love: Paris

5 The city in ruins and the divided city

Barbara Mennel is the Rothman Chair and Director of the Center for the Humanities and the Public Sphere at the University of Florida. She is an Associate Professor of Film Studies and German Studies in the Departments of English and Languages, Literatures, and Cultures. Her recent books include Women at Work in Twenty-First-Century European Cinema (2019) and Queer Cinema: Schoolgirls, Vampires, and Gay Cowboys (2012).

Routledge Critical Introductions to Urbanism and the City