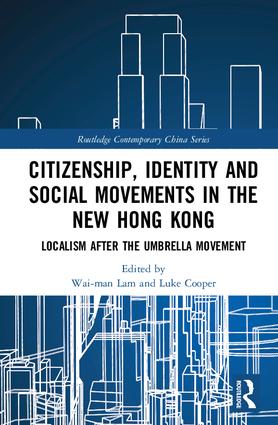 Citizenship, Identity and Social Movements in the New Hong Kong

Hong Kong’s ‘Umbrella Revolution’ has been widely regarded as a watershed moment in the polity’s post-1997 history. While public protest has long been a routine part of Hong Kong’s political culture, the preparedness of large numbers of citizens to participate in civil disobedience represented a new moment for Hong Kong society, reflecting both a very high level of politicisation and a deteriorating relationship with Beijing. The transformative processes underpinning the dramatic events of autumn 2014 have a wide relevance to scholarly debates on Hong Kong, China and the changing contours of world politics today.

This book provides an accessible entry point into the political and social cleavages that underpinned, and were expressed through, the Umbrella Movement. A key focus is the societal context and issues that have led to growth in a Hong Kong identity and how this became highly politically charged during the Umbrella Movement. It is widely recognised that political and ethnic identity has become a key cleavage in Hong Kong society. But there is little agreement amongst citizens about what it means to ‘be Hong Konger’ today or whether this identity is compatible or conflicting with ‘being Chinese’. The book locates these identity cleavages within their historical context and uses a range of theories to understand these processes, including theories of nationalism, social identity, ethnic conflict, nativism and cosmopolitanism. This theoretical plurality allows the reader to see the new localism in its full diversity and complexity and to reflect on the evolving nature of Hong Kong’s relationship with Mainland China.

'This lucidly written book offers a timely analysis of the various shapes of Hong Kong’s thriving localism. It is both empirically rich and theoretically sound. In general, it reveals to keen readers a complex systems theory of changing interconnections, including; generational replacement, new socio-political movements, delicately changing situational identity informed by established as well as emerging social, economic and political divides. It is a must read for anyone who wishes to understand the haphazard development of Hong Kong in a process of accelerating absorption into Mainland China.' - KUAN, Hsin Chi, Emeritus Professor, The Chinese University of Hong Kong, Hong Kong

The development of Hong Kong identity: From local to national identity (Stephan Ortmann)

Visual and discourse resistance on the "China Factor": The cultural formation of the Umbrella Movement in Hong Kong (Wai-Kwok Benson Wong)

Wai-man Lam is Assistant Professor in School of Arts and Social Sciences at the Open University of Hong Kong.

is Senior Lecturer in Politics at Anglia Ruskin University, UK.