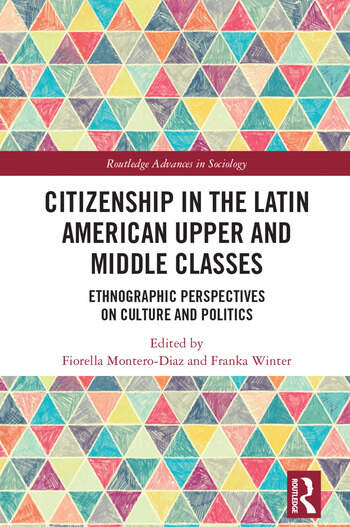 Citizenship in the Latin American Upper and Middle Classes: Ethnographic Perspectives on Culture and Politics

The problem of citizenship has long affected Latin America, simultaneously producing inclusion and exclusion, division and unity. Its narrative and practice both reflect and contribute to the region’s profound inequalities. However, citizenship is usually studied on the margins of society. Despite substantial public interest in recent mass mobilizations, the middle and upper classes are rarely approached as political agents or citizens. As the region’s middle classes continue to grow and new elites develop, their importance can only increase.

This interdisciplinary volume addresses this gap, showcasing recent ethnographic research on middle- and upper-class citizenship in contemporary Latin America. It explores how the region’s middle and upper classes constitute themselves as citizens through politics and culture, and questions how these processes interact with the construction of difference and commonality, division and unity. Subsequently, this collection highlights how elite citizenships are constructed in dialogue with other identities, how these co-constructions reproduce or challenge inequality, and whether they have the potential to bring about change.

Citizenship in the Latin American Upper and Middle Classes

Chapter 2: "What will the respectable public say?": Protest musicianship and class in ‘Sexta’ events in Mexico City – Andrew Green

Chapter 3: Filmmakers as "citizens of the world": Cosmopolitanism and global identities of the Chilean upper-middle class – María Paz Peirano

Chapter 5: "I would like citizenship to mean understanding the other": Relational notions of citizenship in a divided city – Franka Winter

Chapter 7: Banging the other side of the saucepan: Changing political activism and performance of citizenship among Argentina’s middle class 2001–2013 – Daniel Ozarow

Fiorella Montero-Diaz is a lecturer in ethnomusicology at Keele University. She holds an M.Mus. from Goldsmiths University and a PhD from Royal Holloway - University of London.

is a political sociologist with a PhD from the University of Dublin.