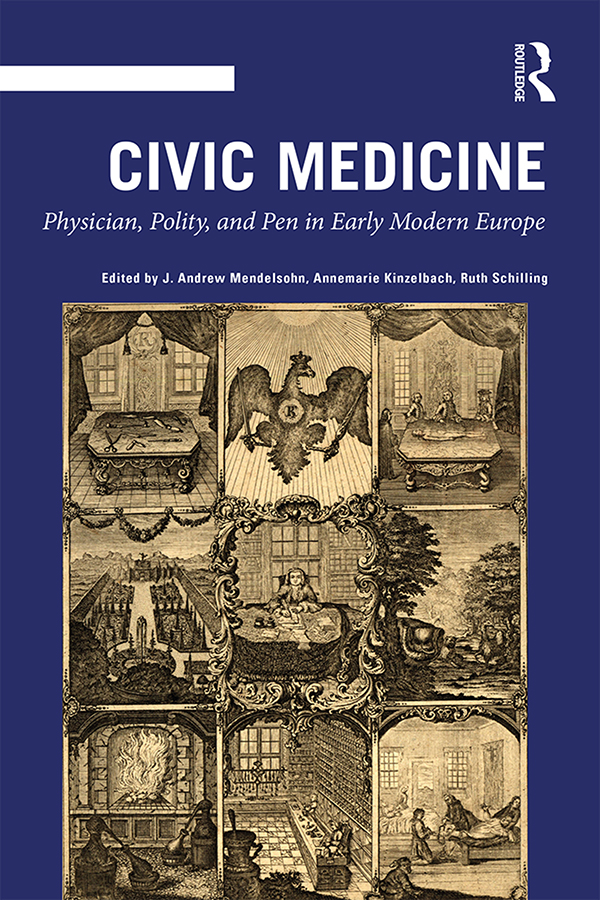 Communities great and small across Europe for eight centuries have contracted with doctors. Physicians provided citizen care, helped govern, and often led in public life. Civic Medicine stakes out this timely subject by focusing on its golden age, when cities rivaled territorial states in local and global Europe and when civic doctors were central to the rise of shared, organized written information about the human and natural world. This opens the prospect of a long history of knowledge and action shaped more by community and responsibility than market or state, exchange or power.

"Civic Medicine offers a striking and pathbreaking perspective on medical knowledge in early modern Europe. Transcending influential approaches in which physicians and patients are viewed as caught up in the networks of the medical marketplace or else of modernising territorial states, Mendelsohn and his team focus instead on the role and activities of physicians in civic office across the continent. This provides a stimulating, holistic vision of the early modern physician and his world, now grounded in an enriched sense of community rather than the market or the state."

"At last we are beginning to understand early modern physicians as full-fledged members of their urban polities, holding offices, taking oaths, and entering into the world of the experts who knew how to employ paper technologies. According to the authors of this volume, even the attentiveness of physicians to careful written descriptions of medical cases arose more from civic humanism than from medicalization, medical police, professionalization, the new science, or even commerce. In revisiting the history of city physicians, these studies offer new insights into medicine’s civic past."

1. Public Practice: The European Longue Durée of Knowing for Health and Polity

2. The Many Uses of Writing: A Humanist Physician in Sixteenth-Century Prague

5. Reporting for Action: Forms of Writing Between Medicine and Polity in Milan, 1580-1650

6. Negotiating on Paper: Councillors, Medical Officers, and Patients in an Early Modern City

7. Accountability, Autobiography, and Belonging: The Working Journal of a Sixteenth-Century Diplomatic Physician Between Venice and Damascus

8. A Sense of Place: Town Physicians and the Resources of Locality in Early Modern Medicine

10. Transformative Itineraries and Communities of Knowledge in Early Modern Europe: The Case of Lazare Rivière’s The Practice of Physick

11. Trading Information: The City of Nuremberg and the Birth of a Latin Medical Weekly

J. Andrew Mendelsohn is Reader in History of Science and Medicine in the School of History at Queen Mary, University of London, having previously taught at Imperial College London.

Ruth Schilling trained in early modern urban history and is Junior Professor for the History of Science at the University of Bremen and scientific coordinator of exhibitions and research at the German Maritime Museum.

The History of Medicine in Context

An interest in medicine is one of the constants that re-occurs throughout history. From the earliest times, man has sought ways to combat the myriad of diseases and ailments that afflict the human body, resulting in a number of evolving and often competing philosophies and practices whose repercussions spread far beyond the strictly medical sphere.

For more than a decade The History of Medicine in Context series has provided a unique platform for the publication of research pertaining to the study of medicine from broad social, cultural, political, religious and intellectual perspectives. Offering cutting-edge scholarship on a range of medical subjects that cross chronological, geographical and disciplinary boundaries, the series consistently challenges received views about medical history and shows how medicine has had a much more pronounced effect on western society than is often acknowledged. As medical knowledge progresses, throwing up new challenges and moral dilemmas, The History of Medicine in Context series offers the opportunity to evaluate the shifting role and practice of medicine from the long perspective, not only providing a better understanding of the past, but often an intriguing perspective on the present.