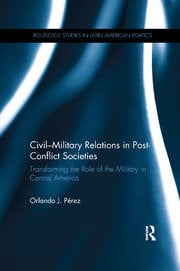 Civil-Military Relations in Post-Conflict Societies: Transforming the Role of the Military in Central America

Guatemala, El Salvador, Nicaragua, and Honduras are four Spanish speaking countries in Central America that possess uniformed military institutions. These four countries represent different approaches to reforms of civil-military relations, and embody varying degrees of success in both institutional democratization and the managing of security forces.

In this book, Orlando J. Pérez expertly examines the competing theories of civil-military relations in Central America to advance our understanding of the origins, consequences and persistence of militarism in Latin America.

Divided into four parts, Pérez begins by proposing a theoretical framework for analyzing civil-military relations, including an analysis of how U.S. foreign and military policy affects the establishment of stable civilian supremacy over the armed forces. Part Two examines the institutional and legal structures under which civil-military relations are carried out revealing in Part Three the reorientation of the missions and roles performed by the armed forces in each country. The concluding part analyzes the role beliefs of members of the military and public opinion about the armed forces in relation to other institutions. Combining both qualitative and quantitative data, Pérez bridges the gap between structural and cultural analyses for a more comprehensive understanding of the links between micro and macro level factors that influence civil-military relations and democratic governance.

Orlando J. Pérez is Associate Dean of the School of Humanities and Social Sciences at Millersville University. He is a member of the Scientific Support Group for the Latin American Public Opinion Project (LAPOP) and directs the Americas Barometer survey in Panama and Honduras.

"The military for decades have played an oversized role on the Central American political stage. Yet, the ending of the Cold War and the resolution of long-standing guerrilla wars have not ended the role of the armies, as they find themselves in a new role of controlling violence linked to narcotraffiking and gangs. In this brilliantly argued and richly detailed volume, we have for the first time an expansive, region-wide reanalysis of the role of the military in this chronically volatile region. Policy-makers, students and citizens alike need to put this volume at the top of their must-read lists." — Mitchell A. Seligson, Vanderbilt University

"Pérez’s book is a cogent and timely contribution to our understanding of the military’s prominent role in Central America. His mixed methods approach provides added depth that will be a model for other scholars to follow."— Gregory Weeks, UNC Charlotte

"Orlando Perez breaks new ground in the study of Latin American militaries in democracy on two major fronts: he has produced a richly detailed comparative analysis of the region’s key Central American cases, and he has based that analysis in solid, accessibly presented empirical evidence of beliefs held by both publics and military officers. In addition to case chapters on El Salvador, Guatemala, Honduras and Nicaragua that capture nuanced differences within the region, Perez unpacks important paradoxes that follow from new patterns of violence and crime in the region. So for instance, he shows that support for democracy correlates with trust in the military, though military worldviews seem to have changed little since the authoritarian period and civil wars that preceded democratization. A must read for anyone interested in understanding the ingredients of democratic governance, security sector reform, and state-society relations in Central America." — Kristina Mani, Oberlin College

Perez (Millersville Univ.) describes the significant transformation of the role of the military in four Central American countries El Salvador, Guatemala, Honduras, and Nicaragua since the end of the brutal civil wars that afflicted all but Honduras. Military rule ended, military size and budgets were significantly reduced, democratic elections were held, and civilian presidents were allowed to serve even in the case of the party of former Salvadoran guerrillas, the Farabundo MartÃ­ National Liberation Front. Perez notes, however, that the specter of military power has not disappeared entirely, as there are significant opportunities for the armed forces to exercise veto power over civilian authorities.Such opportunities have been enhanced by ongoing crime waves, rampant international drug trafficking, high homicide levels, incompetent and corrupt police forces, constitutional provisions that give the military responsibility for preserving or restoring internal order, a lack of civilian experts to provide effective military oversight, and public fear and insecurity accompanied by calls for stronger government. Although democratic governments are generally seen as corrupt, self-serving, and ineffective, trust in the military remains high, and governments are increasingly compelled to use the armed forces in security operations to assist the police.