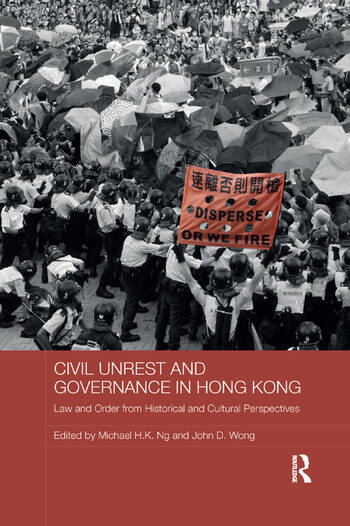 Civil Unrest and Governance in Hong Kong: Law and Order from Historical and Cultural Perspectives

This book examines important social movements in Hong Kong from the perspectives of historical and cultural studies. Conventionally regarded as one of the most politically stable cities in Asia, Hong Kong has yet witnessed many demonstrations and struggles against the colonial and post-colonial governments during the past one hundred years. Many of these movements were brought about in the name of justice and unfolded against the context of global unrest. Focusing on the local developments yet mindful of the international backdrop, this volume explores the imaginaries of law and order that these movements engendered, revealing a complex interplay among evolving notions of justice, governance, law and order and cultural creations throughout the under-explored history of instability in Hong Kong. Underscoring the apparently contrasting discourses on the relationship among the rule of law, law and order and social movements in Hong Kong, the contributors emphasise the need to re-examine the conventional juxtaposition of the law and civil unrest. Readers who have an interest in Asian studies, socio-political studies, legal studies, cultural studies and history would welcome this volume of unique interdisciplinarity.

Part I The past matters:  governance, coloniality of power and law
1. Rule of law in Hong Kong history demythologised: student umbrella movement of 1919 (Michael Ng)
2. ‘Our best trump card’: a brief history of deportation in Hong Kong, 1857–1955 (Christopher Munn)
3. Exclusion as oppression: a quest for extra-legal status for Chinese medicine in colonial Hong Kong (Yu Xiu-ling)
4. How the 1967 riots changed Hong Kong’s political landscape, with the repercussions still felt today (Gary Ka-wai Cheung)
5. 'Flying MPs' and political changes in a colonial setting: political reform under MacLehose’s governorship of Hong Kong (Lui Tai-lok)
6. Between two episodes of social unrest below the Lion Rock: from the 1967 riots to the 2014 Umbrella Movement (John Wong)

Part II The art of argument: justifications and expressions of civil unrest
7. Social movements and the law: the case of Hong Kong (Albert Chen)
8. Civil disobedience and the rule of law (Benny Tai)
9. From civil disobedience to institutional politics: conflict over the Public Order Ordinance in 2000 (Agnes Ku)
10. The artwork of Hong Kong’s Occupy Central Movement (Marco Wan)
11. Who speaks for Lion Rock? Pro-Cantonese campaign (or lack thereof) in Hong Kong  (Yiu-wai CHU)

Michael H.K. Ng is Assistant Professor and Director of the Centre for Chinese Law at the Faculty of Law of the University of Hong Kong.

is Assistant Professor of Hong Kong Studies at the Faculty of Arts of the University of Hong Kong.