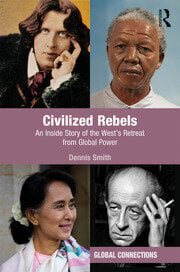 Civilized Rebels: An Inside Story of the West’s Retreat from Global Power

Civilized Rebels compares in depth four very well-known literary and political figures, who all opposed arrogant regimes and became prisoners. Through comparative biographies of Oscar Wilde, Jean Améry, Nelson Mandela and Aung San Suu Kyi, it explores the long-term process of the retreat of the West from global power since the late nineteenth century, relating this to the decline and fall of the British Empire and the trauma surrounding Brexit. Drawing on rich empirical materials to examine themes of forced displacement, war, poverty, imprisonment and the threat of humiliation, the book reveals how these highly civilized rebels penetrated their opponents’ mind-sets, while also providing a sophisticated analysis of how their struggles fitted into the larger world picture. Methodologically and theoretically innovative, and written in a lively and accessible style, Civilized Rebels will appeal to scholars across a range of disciplines, with interests in globalization, historical international relations, postcolonial and subaltern studies, comparative biographical studies, European studies, the sociology of emotions and historical sociology.

Dennis Smith is Emeritus Professor of Sociology at Loughborough University, UK. He is the author of The Rise of Historical Sociology, Globalization: The Hidden Agenda, and Conflict and Compromise: Class Formation in English Society 1830–1914.

"[Dennis] Smith, in his extraordinary work, shows how a person in modern civilized times becomes a rebel, in what social context their rebellious attitude is shaped, and how certain extraordinary personal dispositions contribute to it. The author's observations show an analytical depth and innovation that is at once persuasive and attractive."

"This is one of the most exciting books I have read in any social science in the last decade. It offers a root-and-branch revamping of the historical sociology in the study of different forms of resistance that accompany the decline of British empire and the retreat of the West from the global power."

"Building on his previous work on humiliation, Dennis Smith provides a fascinating account of how four international icons opposed arrogant regimes while navigating forced displacement, threats of humiliation, and expressions of admiration. His analysis offers compelling insights into the ways in which personal struggles relate to broader global contexts."

"Dennis Smith’s Civilized Rebels truly breaks new ground. Mixing the familiar (Wilde) with the less familiar (Améry), and the icon we now think we know (Mandela) with the one we hardly yet know (Suu Kyi), he explores the humanity of the displaced, who turn the state’s attempts at humiliation into victory, not just by resisting but by refusing to be dehumanized. While you read this book, remember that thousands, perhaps millions of prisoners face these tortures and humiliations daily in so-called "civilized" societies. Smith reminds us where we might find civility in the face of modern incivility."

- Denis O’Hearn, Dean of Liberal Arts, University of Texas at El Paso, USA, and author of Living at the Edges of Capitalism: Adventures in Exile and Mutual Aid.

"This book is a very interesting intellectual experiment. It looks at the decline and fall of the British Empire, and of its inferior but over-ambitious rivals in Central Europe and South Africa, through biographical case studies of prominent victims, resisters and to some extent successful challengers involved in the process. The concluding reflections on Brexit and its accompanying delusions are timely and instructive."