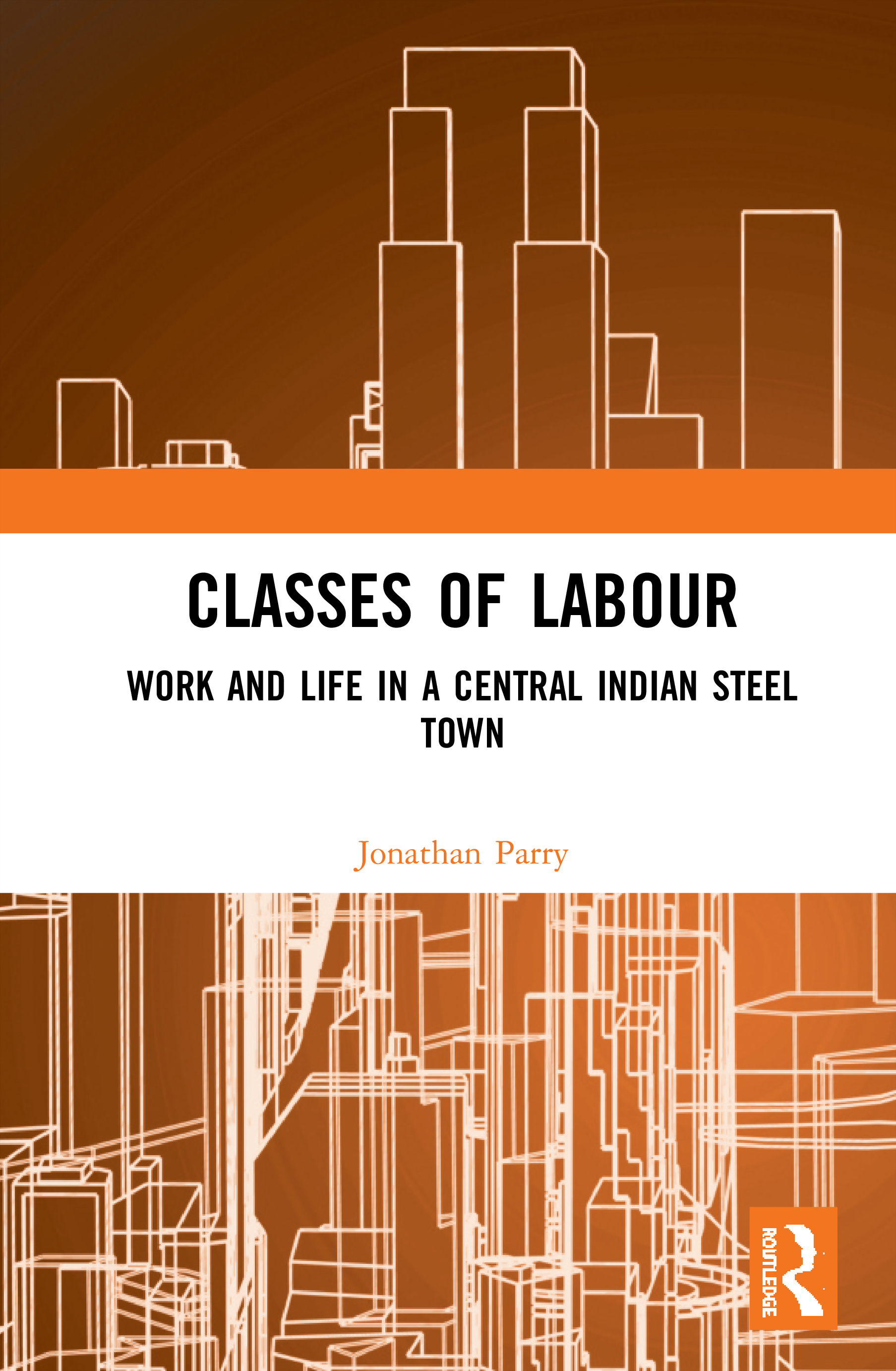 Classes of Labour: Work and Life in a Central Indian Steel Town

is a classic in the social sciences. The rigour and richness of the ethnographic data of this book and its analysis is matched only by its literary style. This magnum opus of 732 pages, an outcome of fieldwork covering twenty-one years, complete with diagrams and photographs, reads like an epic novel, difficult to put down. Professor Jonathan Parry looks at a context in which the manual workforce is divided into distinct social classes, which have a clear sense of themselves as separate and interests that are sometimes opposed. The relationship between them may even be one of exploitation; and they are associated with different lifestyles and outlooks, kinship and marriage practices, and suicide patterns. A central concern is with the intersection between class, caste, gender and regional ethnicity, with how class trumps caste in most contexts and with how classes have become increasingly structured as the ‘structuration’ of castes has declined. The wider theoretical ambition is to specify the general conditions under which the so-called ‘working class’ has any realistic prospect of unity.

PART 1: Context - 1. Introduction: A Symbol and a Portent 2. Classes of Labour 3. Building Bhilai 4. The Price of Modernity PART 2: Work - 5. A Post in the Plant 6. The Work Situation of BSP Labour 7. Private Sector Industry 8. Informal Sector Labour and the Construction of Class PART 3: Life - 9. Caste and Class in the Neighbourhood 10. Growing Up; Growing Apart 11. Marriage and Remarriage 12. Self-inflicted Death PART 4: Concluding - 13. Focusing and Expanding the Lens

Jonathan Parry is Professor Emeritus at the Department of Anthropology in the London School of Economics. He has conducted field research in various parts of India on various different topics. His first study was in a rural area in the sub-Himalayan region where he focused on the classic anthropological themes of caste, kinship, and marriage. He subsequently worked in the city of Banaras where he studied the various communities of ‘sacred specialists’ in one way or another concerned with the ‘business’ of death-specialists who preside over rituals concerned with the disposal of the corpse, the fate of the soul, and the purification of the mourners. More recently, Professor Parry has been doing fieldwork on industrial workers in the central Indian steel town of Bhilai (in the Chhattisgarh region of Madhya Pradesh) which was built on a ‘green field’ site with Soviet collaboration and technology in the late 1950s and early 1960s. The public sector Bhilai Steel Plant is now one of the largest steel plants in Asia, and has served as a magnet for a great deal of private sector industrial development. Part of the fieldwork has focused on shopfloor organisation, but much of it has been conducted in the ex-villages-cum-labour colonies in which the workers have their homes. Professor Parry has also written more widely on the theoretical topics of death, the body, and exchange.

Ajay T.G. is a freelance documentary filmmaker and worked as Professor Parry’s research assistant throughout most of the fieldwork on which this monograph reports.