Classic Writings in Law and Society
Contemporary Comments and Criticisms 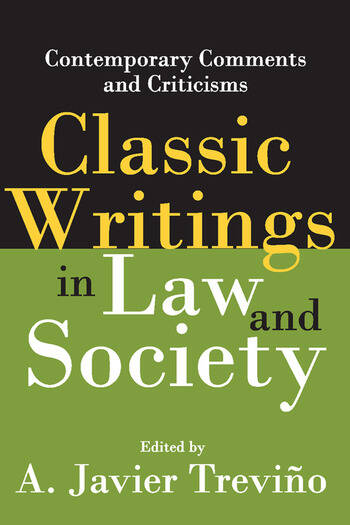 Classic Writings in Law and Society: Contemporary Comments and Criticisms

Over against such reference volumes as encyclopedias, which are intended to provide an overview and summary of a subject, and dictionaries, which define a series of terms, "commentaries" generally consist of a collection of lectures or essays that discuss and explain in some detail particular topics and sources. In law, the best known and oldest of these is William Blackstone's Commentaries on the Laws of England (1765-1769). Others, which are equally prominent, include James Kent's Commentaries on American Law (1826) and Joseph Story's Commentaries on the Constitution of the United States (1833). This volume is presented in the spirit of the aforementioned treatises. It consists of several essays of contemporary comments and criticisms intended generally to inform and educate.

The commentaries in this book have two collective purposes. First and foremost, they are intended to acquaint a new generation of students with thirteen classic books written by diverse sociolegal scholars--ranging from Henry Sumner Maine, Oliver Wendell Holmes, Jr., and Hans Kelsen to Eugen Ehrlich, Nicholas S. Timasheff, and Richard Quinney. Second, they endeavor to demonstrate the contemporary theoretical relevance, the continuing legacy, of these classic writings. Accordingly, the commentaries discuss each of the scholars' work in general, how the particular book under consideration fits into that corpus, and how the book is assessed in a contemporary context. Singly and collectively these books have a clear relation to the "classic" tradition in thought--a tradition that, although not always acknowledged, is of great significance to current theorizing in law and society.

The classic tradition represents those books that have come to be considered the foundational texts in the social scientific study of law. The commentaries collected here were written by some of today's leading scholars of law and society, including Piers Beirne, Dario Melossi, Kalus A. Zigert, Alan Hunt, Marshall B. Clinard, and Dragan Milovanovic.