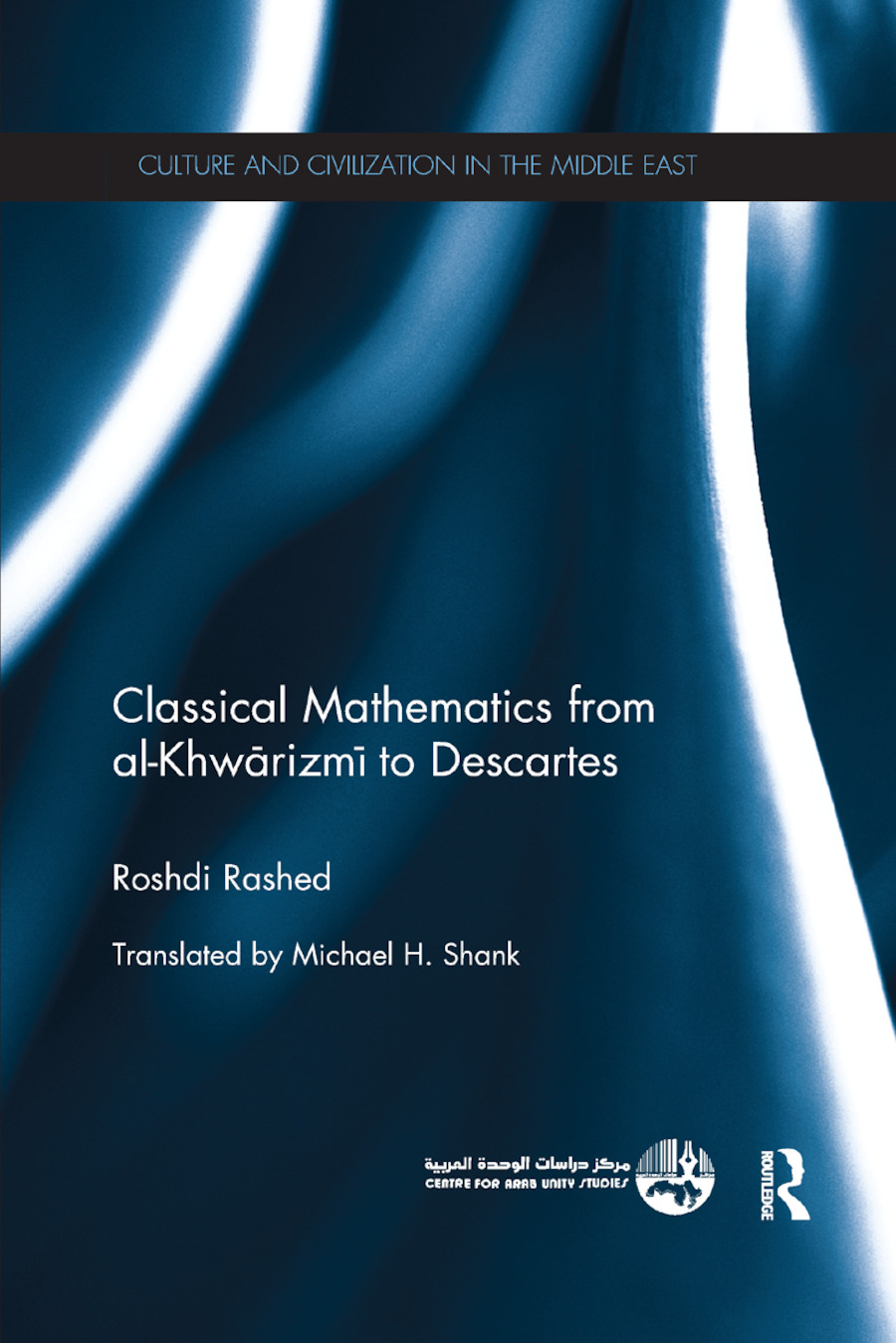 Classical Mathematics from Al-Khwarizmi to Descartes

This book follows the development of classical mathematics and the relation between work done in the Arab and Islamic worlds and that undertaken by the likes of Descartes and Fermat.

‘Early modern,’ mathematics is a term widely used to refer to the mathematics which developed in the West during the sixteenth and seventeenth century. For many historians and philosophers this is the watershed which marks a radical departure from ‘classical mathematics,’ to more modern mathematics; heralding the arrival of algebra, geometrical algebra, and the mathematics of the continuous. In this book, Roshdi Rashed demonstrates that ‘early modern,’ mathematics is actually far more composite than previously assumed, with each branch having different traceable origins which span the millennium. Going back to the beginning of these parts, the aim of this book is to identify the concepts and practices of key figures in their development, thereby presenting a fuller reality of these mathematics.

Introduction Part I: Algebra and Arithmetic 1 Algebra and its unifying role 2 Algebra and Linguistics 3 The First Classification of Curves 4 Descartes Geometry and the distinction between geometrical and mechanical curves 5 The Ovals of Descartes 6 Descartes and the Infinitely Small 7 Fermat and Algebraic Geometry 8 Euclidean Arithmetic 9 Algorithmic Methods 10 Ibn Qurra and Amicable Numbers 11 Fibonacci and Arabic Mathematics 12 Fibonacci and the Latin Extension of Arabic Mathematics 13 Al-Yazdi 14 Fermat and the Origins of Modern Diophantine Analysis Part II: Geometry 15 The Archemedians and the Problems of Infinity 16 Conics and traditions of the early research projections 17 The Continuous Drawing of Conic Curves and the Classification of Curves 18 The Fifth Postulate of Euclid Part III: The Application of Mathematics – Astronomy and Optics 19 The Celestial Cinematics of Ibn Al-Haytham 20 Mirrors

Roshdi Rashed is one of the most eminent authorities on Arabic mathematics and the exact sciences. A historian and philosopher of mathematics and science and a highly celebrated epistemologist, he is currently Emeritus Research Director (distinguished class) at the Centre National de la Recherche Scientifique (CNRS) in Paris, and is the former Director of the Centre for History of Medieval Science and Philosophy at the University of Paris (Denis Diderot, Paris VII). He also holds an Honorary Professorship at the University of Tokyo and an Emeritus Professorship at the University of Mansourah in Egypt.

Michael H. Shank is professor of the History of Science at the University of Wisconsin-Madison, were he teaches surveys of the history of science from antiquity to Newton. His research interests focus on, and often stray beyond, the late-medieval Viennese astronomical and natural philosophical traditions.