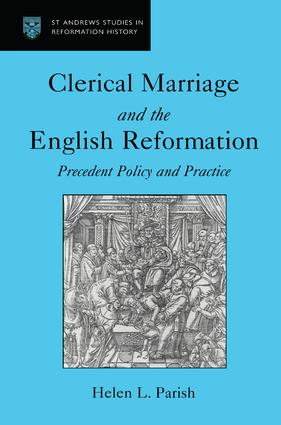 Clerical Marriage and the English Reformation

This volume is an examination of the debate over clerical marriage in Reformation polemic, and of its impact on the English clergy in the second half of the sixteenth century. Clerical celibacy was more than an abstract theological concept; it was a central image of mediaeval Catholicism which was shattered by the doctrinal iconoclasm of Protestant reformers. This study sets the debate over clerical marriage within the context of the key debates of the Reformation, offering insights into the nature of the reformers’ attempts to break with the Catholic past, and illustrating the relationship between English polemicists and their continental counterparts. The debate was not without practical consequences, and the author sets this study of polemical arguments alongside an analysis of the response of clergy in several English dioceses to the legalisation of clerical marriage in 1549. Conclusions are based upon the evidence of wills, visitation records, and the proceedings of the ecclesiastical courts. Despite the printed rhetoric, dogmatic certainties were often beyond the reach of the majority, and the author’s conclusions highlight the chasm which could exist between polemical ideal and practical reality during the turmoil of the Reformation.

'…this careful and thoughtful study does much to flesh-out an important and multi-faceted topic.' History, 2001 'Thorough and carefully argued … a fine monograph from a promising young scholar.' Albion '… well researched and timely…' Religious Studies Review 'This learned and lively monograph meets a longstanding need for a thorough account of the English debate concerning clerical marriage…. (Parish's) book, while conveying a vivid impression of the depth of feeling on both sides of the debate, is also scrupulously impartial. It constitutes a most distinguished debut…' Journal of Ecclesiastical History Vol.53/3 'The great strength of this work is that it succeeds in convincing the reader of the theological importance of the issue of clerical marriage…. a valuable resource for Reformation scholars seeking to connect the debate on clerical marriage to major ideological issues of the day.' The Catholic Historical Review