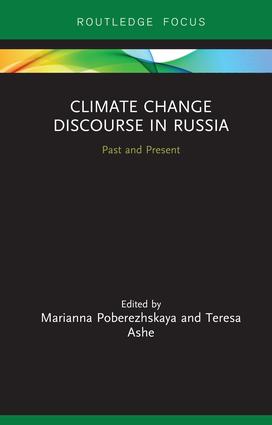 Past and Present, 1st Edition

This book explores the development of climate change discourses in Russia. It contributes to the study of climate change as a cultural idea by developing the extensive Anglophone literature on environmental science, politics and policy pertaining to climate change in the West to consider how Russian discourses of climate change have developed. Drawing on contributors specialising in numerous periods, regions, disciplines and topics of study, the central thread of this book is the shared attempt to understand how environmental issues, particularly climate change, have been understood, investigated and conceptualised in Soviet and post-Soviet Russia. The chapters aim to complement work on the history of the discursive political construction of climate change in the West by examining a highly contrasting (but intimately related) cultural context. Russia remains one of the world’s largest greenhouse gas emitters with one of the most carbon-intensive economies. As the world begins to suffer the extreme consequences of anthropogenic climate change, finding adequate solutions to global environmental problems necessitates the participation of all countries. Russia is a central actor in this global process and it, therefore, becomes increasingly important to understand climate change discourse in this region. Insights gained in this area may also be illuminating for examining environmental discourses in other resource rich regions of the world with alternative economic and political experiences to that of the West (e.g. China, Middle East).

This book will be of great interest to students and scholars of Russian environmental policy and politics, climate change discourses, environmental communication and environment and sustainability in general.

"Historical accounts of the science and politics of climate change have predominantly been drawn from the experience of the Anglosphere and western Europe.  In this new volume, Marianna Poberezhskaya and Teresa Ashe, and colleagues, offer a different and valuable perspective, one drawn from the post-war Soviet experience.  This collection of studies both challenge and broaden dominant western narratives and will be valuable for all cultural historians of climate change." -- Mike Hulme, Professor of Human Geography, University of Cambridge, UK

"This book brings together leading scholars of Russia’s present and past approaches to questions of climate change. The volume will be of great interest to those seeking to understand the complexity of climate change politics, as well as to readers seeking to better understand the science-policy interface in Russia and Russia’s approaches to complex, global policy problems."

"This book makes an important contribution to our understanding of Russian attitudes towards climate change and of their policy implications. Despite its huge territorial extent and major role in global greenhouse gas emissions, Russia is frequently ignored or misunderstood in climate change debates. This book is therefore both timely and very much needed." -- Denis Shaw, Honorary Senior Research Fellow, University of Birmingham, UK

1. Introduction: The Importance of the Soviet experience

3. Environmental Change and the Soviet Media before 1986: Dissident and officially sanctioned voices

4. The Environment of an Energy Giant: Climate discourse framed by ‘hydrocarbon culture’

5. Traditional media and climate change in Russia: A case study of Izvestiia

is Associate Lecturer and Honorary Fellow of the Geography Department at the Open University, UK.

Routledge Focus on Environment and Sustainability