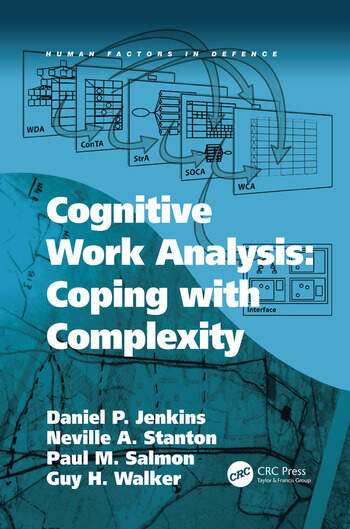 'Complex sociotechnical systems' are systems made up of numerous interacting parts, both human and non-human, operating in dynamic, ambiguous and safety critical domains. Cognitive Work Analysis (CWA) is a structured framework specifically developed for considering the development and analysis of these complex socio-technical systems. Unlike many human factors approaches, CWA does not focus on how human-system interaction should proceed (normative modelling) or how human-system interaction currently works (descriptive modelling). Instead, through a focus on constraints, it develops a model of how work can be conducted within a given work domain, without explicitly identifying specific sequences of actions (formative modelling). The framework leads the analyst to consider the environment the task takes place within, and the effect of the imposed constraints on the way work can be conducted. It provides guidance through the process of answering the questions of why the system exists, what activities can be conducted within the domain as well as how these activities can be achieved, and who can perform them. The first part of the book contains a comprehensive description of CWA, introducing it to the uninitiated. It then presents a number of applications in complex military domains to explore and develop the benefits of CWA. Unlike much of the previous literature, particular attention is placed on exploring the CWA framework in its entirety. This holistic approach focuses on the system environment, the activity that takes place within it, the strategies used to conduct this activity, the way in which the constituent parts of the system (both human and non-human) interact and the behaviour required. Each stage of this analysis identifies the constraints governing the system; it is contended that through this holistic understanding of constraints, recommendations can be made for the design of system interaction; increasing the ability of users to cope with unanticipated, unexpected situations. This book discusses the applicability of the approach in system analysis, development and evaluation. It provides process to what was previously a loosely defined framework.

Contents: Introduction; It's a complex world; Interaction design; Application of CWA in familiar domains; Applications of CWA in a complex world; Using CWA to design for dynamic allocation of function; Designing interfaces using CWA; Development of a CWA software tool; Does the tool make the CWA process any quicker or easier?; Conclusions; Appendix; Bibliography; Index.

Dr Dan Jenkins graduated in 2004 from Brunel University with an M.Eng (Hons) in Mechanical Engineering and Design, receiving the 'University Prize' for the highest academic achievement in the school. As a sponsored student, Dan finished with more two years' experience as a design engineer in the automotive industry. He then went to work in Japan for a major car manufacturer, facilitating the necessary design changes to launch a new model in Europe. In 2005, Dan returned to Brunel University and took up the full-time role of research fellow in the Ergonomics Research Group, working primarily on the Human Factors Integration Defence Technology Centre (HFI-DTC) project. Dan studied part-time for his PhD in Human Factors and Interaction Design, graduating in 2008. Both academically and within industry Dan has always had a strong focus on human factors, system optimisation and design for inclusion. He has authored and co-authored numerous journal papers, conference articles, book chapters and books. Dan and his colleagues on the HFI DTC project were awarded the Ergonomics Society's President's Medal in 2008. Professor Stanton holds a Chair in Human-Centred Design and has published over 75 international academic journal papers and 10 books on human-centred design. He was a Visiting Fellow of the Department of Design and Environmental Analysis at Cornell University in 1998. In 1998 he was awarded the Institution of Electrical Engineers Divisional Premium Award for a co-authored paper on Engineering Psychology and System Safety. The Ergonomics Society awarded him the prestigious Otto Edholm medal in 2001 for his contribution to basic and applied ergonomics research. Professor Stanton is on the editorial boards of Ergonomics, Theoretical Issues in Ergonomics Science and the International Journal of Human Computer Interaction. Professor Stanton is a Chartered Occupational Psychologist registered with The British Psychological Society, a Fellow of The Ergonomics Society and a Fellow of the RSA. He has a BSc in Occupational Psychology from Hull University, an MPhil in Applied Psychology from Aston University, and a PhD in Human Factors, also from Aston. Dr Paul Salmon is a Research Fellow within the Human Factors Group at Brunel University and holds a BSc in Sports Science and an MSc in Applied Ergonomics, both from the University of Sunderland, and a PhD in Human Factors from Brunel University. Paul has significant experience in applied human factors research in a number of domains, including the military, civil and general aviation, rail and road transport, and has previously worked on a variety of research projects within these sectors. This has led to Paul gaining expertise in a broad range of areas, including human error, situation awareness, and the application of human factors methods, including human error identification, situation awareness measurement, teamwork assessment, task analysis and cognitive task analysis methods. Paul's current research interests include the areas of situation awareness in command and control, human error and the application of human factors methods in sport. Paul has authored and co-authored various scientific journal articles, conference articles, book chapters and books and was awarded the 2006 Royal Aeronautical Society Hodgson Prize for a co-authored paper in the society's journal. He was also co-recipient of the Ergonomic Society's President's Medal in 2008. Dr Guy Walker read for a BSc Honours degree in Psychology at Southampton University specialising in engineering psychology, statistics and psychophysics. During his undergraduate studies he also undertook work in auditory perception laboratories at Essex University and the Applied Psychology Unit at Cambridge University. After graduating in 1999 he moved to Brunel University, gaining a PhD in Human Factors in 2002. His research focused on driver performance, situational awareness and the role of feedback in vehicles. Since this time Guy has worked for a human factors consultancy on a project funded by the Rail Safety and Standards Board, examining driver behaviour in relation to warning systems and alarms fitted in train cabs. Currently Guy works within the DTC HFI consortium at Brunel University, engaged primarily in work on future C4i systems. He is also author of numerous journal articles and book contributions. Along with his colleagues on the HFI DTC project, Guy was awarded the Ergonomic Society's President's Medal in 2008.

'The book Cognitive Work Analysis: Coping with Complexity, elegantly, intuitively and compellingly makes the case for why cognitive work analysis (CWA) is different from, and provides great value added to, the two more traditional human factors techniques of hierarchical task analysis, and participatory user-centered design. Such value is particularly relevant in the emerging domain of complex multi-operator, multi-agent systems; which must react appropriately to unexpected and unpredicted events (the world's economy being a recent example). The focus of the CWA technique is not so much on what should be done in system interaction (the traditional techniques), but what could be done, given the combination of constraints from human cognition, physical capabilities and the environment. As such, the authors have built on the foundational work of Rasmussen and Vicente, but have gone beyond in three important respects: First, in an effort to reach a wide audience, they have started with simple systems (basic interface design), to gradually move the reader's understanding toward the more complex systems; second, they ultimately consider a wide variety of system applications beyond the process control domain where CWA had most traditionally been applied. The applications to command and control systems are particularly insightful; third, they place considerable emphasis on teaching the reader how to do CWA, in a way that can bring this technique closer to a wide variety of applications. Because the book is also clearly and intuitively written, with plenty of examples, it should be a valuable addition to the toolbox of human factors practitioners, who must confront the many complex, distributed net-centric and ill-defined tasks, carried out increasingly by workers in the information age of the 21st century.' Christopher D. Wickens, University of Illinois and University of Colorado, USA 'How do you deal with burgeoning and interactive sources of uncertainty while all the