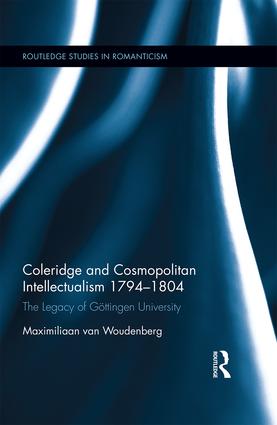 Viewing Samuel Taylor Coleridge's pursuit of continental intellectualism through the lens of cosmopolitanism, Maximiliaan van Woudenberg examines the so-called 'German Mania' of the writer in the context of the intellectual history of the university. At a time when the confessional model of Oxbridge precluded a liberal education in England, van Woudenberg argues, Coleridge's pursuit of continental methodologies and networks encountered at the University of Göttingen anticipated the foundation of the modern von Humboldt research-university model. Founded by the Hanoverian rulers of Great Britain, this cosmopolitan institution of knowledge successfully fostered cross-cultural interchange between German and British intellectuals during the latter half of the eighteenth century. van Woudenberg links the origins of Coleridge's engagement with European intellectualism to his first encounter with the innovations of a Reform university during his studies at the University of Göttingen in 1799, a period that many critics and biographers believe spoiled his poetry. Drawing on hitherto unexamined primary records and documents in German Kurrentschrift, this study shows Coleridge to be a visionary whose cross-cultural dissemination of continental intellectualism in England was ahead of its time and presents an intriguing episode in Cosmopolitan Romanticism by a major canonical figure.

"His thorough study, not least for its sheer wealth of hitherto inaccessible or undigested primary materials, is a considerable enrichment for any university library. … Woudenberg's book also functions as an invaluable signpost for anyone researching this vital period in Coleridge's life, or with an interest in the ramifications of European cosmopolitanism and intellectualism around the turn of the century."

"I recommend this book wholeheartedly to all scholars of Coleridge and to those working on Romanticism and its Anglo-German associations."

"This book puts “Göttingen and Coleridge” fully on the map; it is not only a vital contribution to Coleridge studies in itself but a prompt for further exploration of Coleridge beyond England."

Introduction: What Did Coleridge Do in Göttingen?

2. Full Child of my Own Brain: Planning the German Tour

3. The Cosmopolitan Intellectualism of Göttingen

4. Coleridge and the Göttingen Research Library

5.Continental Research Processes and the Projected Life of Lessing

Maximiliaan van Woudenberg is College Professor in the Department of English and Communications at the Sheridan Institute of Technology, Canada.