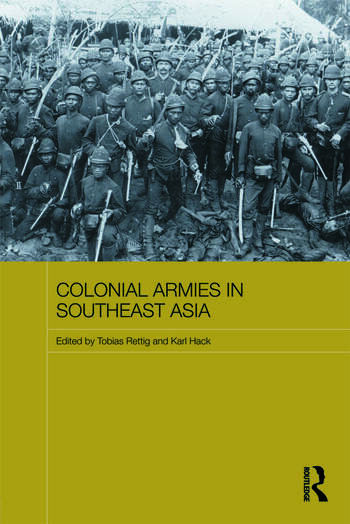 Colonial armies were the focal points for some of the most dramatic tensions inherent in Chinese, Japanese and Western clashes with Southeast Asia. The international team of scholars take the reader on a compelling exploration from Ming China to the present day, examining their conquests, management and decolonization.

The journey covers perennial themes such as the recruitment, loyalty, and varied impact of foreign-dominated forces. But it also ventures into unchartered waters by highlighting Asian use of ‘colonial’ forces to dominate other Asians. This sends the reader back in time to the fifteenth century Chinese expansion into Yunnan and Vietnam, and forwards to regional tensions in present-day Indonesia, and post-colonial issues in Malaysia and Singapore.

Drawing these strands together, the book shows how colonial armies must be located within wider patterns of demography, and within bigger systems of imperial security and power – American, British, Chinese, Dutch, French, Indonesian, and Japanese - which in turn helped to shape modern Southeast Asia.

Colonial Armies in Southeast Asia will interest scholars working on low intensity conflict, on the interaction between armed forces and society, on comparative imperialism, and on Southeast Asia.

1. Imperial Systems of Power, Colonial Forces, and the Making of Modern Southeast Asia  2. Demography and Domination in Southeast Asia  3. Ming Colonial Armies in Fifteenth Century Southeast Asia Experimenting with Tools of Conquest and Domination  4. Ethnicity and Martial Races: The Garde Indigène of Cambodia in the 1880s to 1890s  5. Double-Edged Swords of Conquest in Indochina: Tirailleurs Tonkinois, Chasseurs Annamites, and Militias, 1883-1895  6. The Mixed Company: Fighting Power and Ethnic Relations in the Dutch Colonial Army, 1890-1920  Loyalty and Revolt in the Era of Nationalism and War  7. American Exceptionalism in Colonial Forces? The Philippine Scout Mutiny of 1924  8. French Military Dilemmas in Indochina from 1900 to 1945: The Yen Bay Mutiny and its Aftermath  9. Colonial Forces in British Burma: A National Army Postponed Decolonisation  10. The Impact of the Japanese Occupation on Colonial and Anti-Colonial Armies  11. Imperialism and Decolonisation in Southeast Asia: Colonial Forces and British World Power Post Colonial Analyses and Residues  12. Colonial Militias in East Timor from the Portuguese Period to Independence  13. Colonial Forces and Postcolonial Memories: The Malay Regiment in Malaysia and Singapore