Colonial Counterinsurgency and Mass Violence
The Dutch Empire in Indonesia 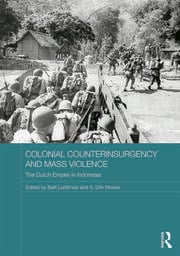 Colonial Counterinsurgency and Mass Violence: The Dutch Empire in Indonesia

Whether out of historical interest, romantic identification with the colonized or as models for contemporary counter-insurgency experts, the mass violence of insurgency and counter-insurgency in the post-war decolonization of the European empires has long exerted an intense fascination. In the main, the dramas in French Algeria and British Kenya in the 1950s have dominated the scene, overshadowing the equally violent events that unfolded in the Dutch, Belgian and Portuguese empires. Colonial counterinsurgency and mass violence is the first book in English to treat the intense conflict that occurred during the ‘Indonesian revolution’—the decolonization struggle of the Dutch East Indies between 1945 and 1949. This case is particularly significant as the first episode of post-war colonial violence, indeed one with global reverberations. International opinion was ranged against the Dutch, and the nascent United Nations condemned its euphemistically termed ‘police actions’ to reclaim the archipelago from Indonesian nationalists after defeat by the Japanese in 1942. As this book makes clear, however, intra-Indonesian violence was no less prevalent, as rival independence visions vied for control and villagers were caught between the fronts. Taking a multi-perspectival approach, eighteen authors examine the origins of the conflict as well as its representational and memory dimensions. Colonial counterinsurgency and mass violence will appeal to scholars of imperial history, mass violence and memory studies alike.

This book is based on a special issue of the Journal of Genocide Research.

1. Colonial counterinsurgency and mass violence: the Dutch empire in Indonesia Part I. Conquest and reconquest  2. Colonial warfare and military ethics in the Netherlands East Indies, 1816–1941  3. Genocide in the Kampongs? Dutch nineteenth century colonial warfare in Aceh, Sumatra  4. Business as usual: Dutch mass violence in the Indonesian War of Independence 1945-1949  5. Learning on ‘the job’: Dutch war volunteers entering the Indonesian war of independence, 1945–46  6. ‘Who wants to cover everything, covers nothing’: the organization of indigenous security forces in Indonesia, 1945–50  Part II. Indonesian violence  7. The killing of Dutch and Eurasians in Indonesia's national revolution (1945–49): a ‘brief genocide’ reconsidered  8. Anti-Chinese violence in Java during the Indonesian Revolution, 1945–49  9. Walking the tightrope: internal Indonesian conflict, 1945-1949  Part III. Representations and memories  10. ‘Not a colonial war’: Dutch film propaganda in the fight against Indonesia, 1945–49  11. ‘Trust me, this news is indeed true’: representations of violence in Indonesian newspapers during the Indonesian revolution, 1945-1948  12. Cleo's ‘unfinished business’: coming to terms with Dutch war crimes in Indonesia's war of independence  13. Colonial memory and forgetting in the Netherlands and Indonesia  14. From national sacrifice to compensation claims: changing Indonesian representations of the Westerling massacres in South Sulawesi (1946-1947)  15. Competitive or multidirectional memory? The interaction between postwar and postcolonial memory in the Netherlands  16. Epilogue: On genocide and mass violence in colonial Indonesia

Bart Luttikhuis studied history and philosophy at the University of Amsterdam and Humboldt University in Berlin, and in 2014 completed his PhD at the European University Institute, Florence, on ‘Constructions of Europeanness in late-colonial Indonesia, 1910–1940’.

"One gains much from reading Colonial Counterinsurgency from cover to cover, for it is a convincing example of how scholars with sometimes quite different positions can fruitfully enter into a conversation that has relevance beyond their narrow field. In doing so, this anthology has brought a high level of complexity to a hitherto simplified historical narrative."