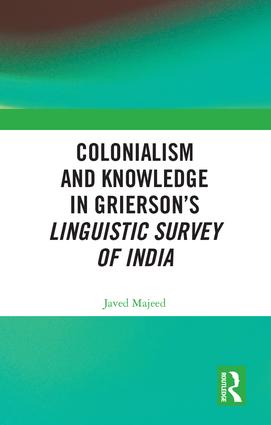 Colonialism and Knowledge in Grierson’s Linguistic Survey of India

This book is the first detailed examination of George Abraham Grierson’s Linguistic Survey of India, one of the most complete sources on South Asian languages. It shows that the Survey was characterised by a composite and collaborative mode of producing knowledge, which undermines any clear distinctions between European orientalists and colonised Indians in British India. Its authority lay more in its stress on the provisional nature of its findings, an emphasis on the approximate nature of its results, and a strong sense of its own shortcomings and inadequacies, rather than in any expression of mastery over India’s languages.

The book argues that the Survey brings to light a different kind of colonial knowledge, whose relationship to power was much more ambiguous than has hitherto been assumed for colonial projects in modern India. It also highlights the contribution of Indians to the creation of colonial knowledge about South Asia as a linguistic region. Indians were important collaborators and participants in the Survey, and they helped to create the monumental knowledge of India as a linguistic region which is embodied in the Survey.

This volume, like its companion volume Nation and Region in Grierson’s Linguistic Survey of India, will be a great resource for scholars and researchers of linguistics, language and literature, history, political studies, cultural studies and South Asian studies.

‘The multi-volume Linguistic Survey of India was one of the most comprehensive investigations into Indian society and culture ever launched under the British Raj. Yet it has been much neglected subsequently and plays little role in contemporary understandings of Orientalism and ‘colonial knowledge’. Javed Majeed rescues it and, by so doing, offers a profound critique of how those conceptual categories have been formulated. In particular, he questions whether command and certainty dominated the colonial project so much as insecurity and ambivalence. He also brings out of the shadows one of the most complex intellectuals of the later colonial era, the Survey’s Director George Grierson. These two volumes [Colonialism and Knowledge and Nation and Region] help to reset the broad agenda of colonial and postcolonial studies.’

‘Displaying exemplary patience and combining it with his unparalleled zest for sustained scholarship, Majeed’s unique study takes us well beyond expositing Grierson’s titular aim, correcting along its way several deep-seated misconceptions around many conceptual categories. Written in transparent prose, it provides us with deep insights on the LSI and numerous literary texts from Lal Ded to Rushdie and shows how Grierson’s epochal work has cast a lengthening shadow on all major scholarship on Indian languages up to our own time.’

Acknowledgements. Note on Transliteration. Introduction: The Survey’s Inception 1 Colonial Categories of Thought 2 The Colonial State and the Survey 3 Illness, Eyesight and Crossing Borders 4 Scripts and Spectacles 5 White Noise and Séances: The ‘Gramophone or Phonetic Survey’ 6 Archival Self-Reflexivity 7 Uncertain Knowledge in the Survey 8 Names and Authorship. Conclusion: The Survey as a Colonial Project. Bibliography. Index

Javed Majeed is Professor of English and Comparative Literature at King’s College London, UK, and has held appointments at SOAS, University of London, and Queen Mary, University of London. He has published widely on the intellectual and literary history of modern South Asia. His previous books include Ungoverned Imaginings: James Mill’s The History of British India and Orientalism (1992), Autobiography, Travel and Postnational Identity: Gandhi, Nehru and Iqbal (2007), and Muhammad Iqbal: Islam, Aesthetics and Postcolonialism (2009).