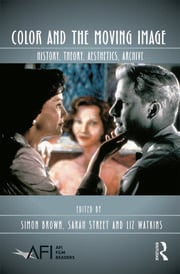 This new AFI Film Reader is the first comprehensive collection of original essays on the use of color in film. Contributors from diverse film studies backgrounds consider the importance of color throughout the history of the medium, assessing not only the theoretical implications of color on the screen, but also the ways in which developments in cinematographic technologies transformed the aesthetics of color and the nature of film archiving and restoration. Color and the Moving Image includes new writing on key directors whose work is already associated with color—such as Hitchcock, Jarman and Sirk—as well as others whose use of color has not yet been explored in such detail—including Eric Rohmer and the Coen Brothers. This volume is an excellent resource for a variety of film studies courses and the global film archiving community at large.

Anna Batistova works as the head of audiovisual collections at National Film Archive in Prague (Czech Republic), and an assistant professor at Department of Film Studies and Audiovisual Culture at Masaryk University, Brno (Czech Republic). She does research in history of screening technologies and teaches cinema technology, early cinema, Czech cinema, and audiovisual archiving.

teaches film at Rutgers University, USA. Author of Widescreen Cinema (Harvard University Press, 1992) and American Cinema/American Culture (McGraw Hill, 1994, 2004, 2008, and 2012), in 2005-2006 he received a Guggenheim Fellowship to work on digital cinema. In 2008 he won an Academy Fellows grant to research a book on motion picture color.

is Director of Studies for Film and TV at Kingston University, UK. He has published widely on a variety of topics including the development of the early British film industry, early colour cinematography and contemporary American television.

is a Lecturer in Film at Roehampton University. He is the author of the forthcoming monograph, Supercinema: Film Theory in the Digital Age (Berghahn), and co-editor of Deleuze and Film (with David Martin-Jones, Edinburgh University Press, 2012).

is Project Manager for the Haghefilm Foundation and Film Preservation Specialist and Color Grader at Haghefilm Conservation. She has previously collaborated in research and restoration projects with Italian film archives such as Museo Nazionale del Cinema in Turin.

is a photographer and a film researcher. She lectures at the School of Arts, University College Ghent (BE), where she wrote a PhD on "funny" cinematography and special effects photography in Mack Sennett slapstick comedies of the 1920s.

is a Cinema and Media Studies PhD Candidate in the UCLA

Department of Film, Television, and Digital Media. He is currently working

on his dissertation on the narration of beginnings in films.

is Distinguished Service Professor in Department of Cinema and Media at the University of Chicago, and author of D.W. Griffith and the Origins of American Narrative Film (University of Illinois Press, 1994), The Films of Fritz Lang; Allegories of Vision and Modernity (BFI, 2000), and over a hundred articles.

is Lecturer in European Film at the University of Exeter. She is the editor of Eric Rohmer: Interviews (University of Mississippi Press, 2013) and is completing her monograph Cinema at the Shore: The Beach in French Cinema.

Heather Heckman is Assistant Director of Moving Image Research Collections at the University of South Carolina.

is associate professor of Film Studies Wesleyan University, USA. His books include Harnessing the Technicolor Rainbow (University of Texas Press, 2007) and Rudolf Arnheim for Film and Media Studies (Routledge 2011). His current project is a history of sound-era serials entitled Matinee Melodrama.

is an art historian, who has published The Wrong House: The

(Uitgeverij, 2007) and Framing Pictures: Film and the Visual Arts (Edinburgh University Press, 2011). He currently teaches at the Department of Art History of the University of Ghent in Belgium

is a Visiting Assistant Professor in Film and Media Studies at Amherst College. His Doctoral research on "Pulses of Abstraction: Episodes from a History of Animation" was completed at the University of Chicago.

is an associate professor of film studies at Carleton University in Canada and the author of Cinema’s Conversion to Sound (Indiana University Press, 2005). He is currently completing a book on musical films of the early 1930s titled Entertainment for Export: Movies, Songs, and Electric Sound?

holds a doctorate in Analytical Chemistry and has worked on biosensors and intellectual property rights before turning to film preservation. His research interests include heritage color systems and new scientific, analog and digital approaches in film restoration. He is Conservation Technology Manager at the British Film Institute, and formerly R&D Manager at Cineco/Haghefilm and Project Manager for the Haghefilm Foundation.

is a doctoral fellow at University of Amsterdam with a project on philosophical scepticism in contemporary cinema. He is also a lecturer at the Department of German Languages and Literatures at Heinrich Heine University in Düsseldorf.

is Professor of Film, University of Bristol. Her publications include British National Cinema (Routledge 1997 and 2009), Transatlantic Crossings (Continuum, 2002) and Black Narcissus (BFI, 2005). Her latest book is The Negotiation of Innovation: Colour Films in Britain (BFI, 2012).

is a doctoral candidate in Screen Cultures at Northwestern University. Her primary research interests include spectatorship, film theory, modernist architecture, and the neutralized movie house.

is Assistant Professor of Film Studies at the University of Calgary. He has published essays about early cinema in Canada, non-theatrical film culture and technology, and the history of amateur cinema.

is Director of Film Studies at Michigan State University and maintains a part-time, joint appointment at the University of St Andrews. He has published articles on the Davide Turconi and Josef Joye film collections, and on color theory and design in silent cinema. His book Moving Color: Silent Film, Mass Culture, Modernism (Rutgers University Press, 2012).