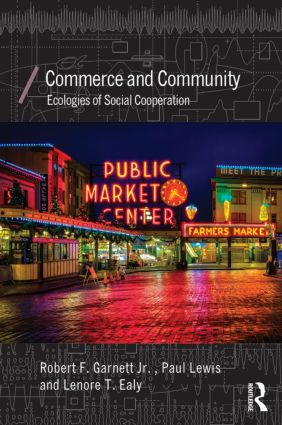 Since the end of the Cold War, the human face of economics has gained renewed visibility and generated new conversations among economists and other social theorists. The monistic, mechanical "economic systems" that characterized the capitalism vs. socialism debates of the mid-twentieth century have given way to pluralistic ecologies of economic provisioning in which complexly constituted agents cooperate via heterogeneous forms of production and exchange. Through the lenses of multiple disciplines, this book examines how this pluralistic turn in economic thinking bears upon the venerable social–theoretical division of cooperative activity into separate spheres of impersonal Gesellschaft (commerce) and ethically thick Gemeinschaft (community).

Drawing resources from diverse disciplinary and philosophical traditions, these essays offer fresh, critical appraisals of the Gemeinschaft / Gesellschaft segregation of face-to-face community from impersonal commerce. Some authors issue urgent calls to transcend this dualism, whilst others propose to recast it in more nuanced ways or affirm the importance of treating impersonal and personal cooperation as ethically, epistemically, and economically separate worlds. Yet even in their disagreements, our contributors paint the process of voluntary cooperation – the space commerce and community – with uncommon color and nuance by traversing the boundaries that once separated the thin sociality of economics (as science of commerce) from the thick sociality of sociology and anthropology (as sciences of community).

This book facilitates critical exchange among economists, philosophers, sociologists, anthropologists, and other social theorists by exploring the overlapping notions of cooperation, rationality, identity, reciprocity, trust, and exchange that emerge from multiple analytic traditions within and across their respective disciplines.

This work is vitally necessary. These essays broaden and deepen our understanding of human nature, the nature of human social institutions, and of the effects of markets on human well-being. They deserve, and repay, serious attention.

This is a profound collection, addressing the relative and interacting roles of community and market in society. The authors, from various disciplines and perspectives, are unified in trying to see the inter-relations between community and market. The results of their research provide us with new and promising frameworks that could transform the study of economy and society.

This important collection of essays represents a milestone in breaking down the separation between market-based forms of coordination principally associated with economics, and communal modes of cooperation principally associated with sociology and anthropology. The contributions provide a fascinating window into the many ways in which the commercial and the communal intertwine and in many cases presuppose one another.

Lenore T. Ealy is President of The Philanthropic Enterprise, USA.

Social Theory is experiencing something of a revival within economics. Critical analyses of the particular nature of the subject matter of social studies and of the types of method, categories and modes of explanation that can legitimately be endorsed for the scientific study of social objects, are re-emerging. Economists are again addressing such issues as the relationship between agency and structure, between economy and the rest of society, and between the enquirer and the object of enquiry. There is a renewed interest in elaborating basic categories such as causation, competition, culture, discrimination, evolution, money, need, order, organization, power probability, process, rationality, technology, time, truth, uncertainty, value etc.

The objective for this series is to facilitate this revival further. In contemporary economics the label “theory” has been appropriated by a group that confines itself to largely asocial, ahistorical, mathematical “modelling”. Economics as Social Theory thus reclaims the “Theory” label, offering a platform for alternative rigorous, but broader and more critical conceptions of theorizing.