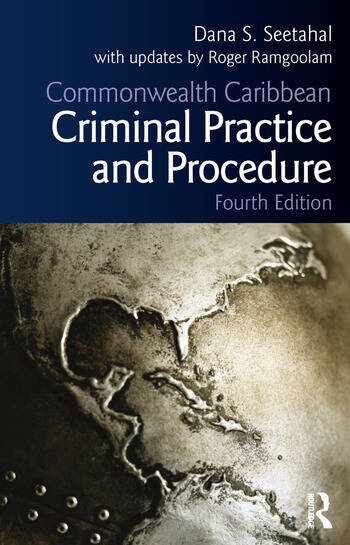 developments in the law in criminal practice and procedure across the region. As the only

Caribbean, the book clarifies the state law in each of 11 jurisdictions, while at the same time

Both statute law and common law are examined in the relevant jurisdictions, which include

Trinidad and Tobago, Guyana, Barbados, Jamaica and Grenada amongst others. The impact

of statutory changes in the laws are analysed, as well as recent developments in the common

law. Throughout the text the statutory law in the Commonwealth Caribbean is compared with

similar English legislation, in light of the analysis of such legislation in English case law.

students. In addition, as the only book that deals specifically with criminal practice and

procedure in the regions, it has proved a valuable reference tool for legal practitioners,

Dana S. Seetahal SC was an attorney at law of over 30 years’ experience. She was a private

practitioner who appeared for both the defence and the State. She was also a public prosecutor

for several years and a senior lecturer at the Hugh Wooding Law School, Trinidad and Tobago

for 12 years. She held a Master of Science in Criminology from Florida State University and was

justice and related areas. She acted as a criminal justice consultant to governments across the

in the Parliament of Trinidad and Tobago. In January 2006 she was appointed Senior Counsel.

Tragically Dana Seetahal was murdered in May 2014 at Woodbrook, Trinidad. Her untimely

passing left relatives, friends and the legal fraternity in a state of shock at the callousness of her

assassination. In 2011, when I, Roger Ramgoolam, assumed the post of Course Director of

discovered that this excellent textbook, which was the backbone of the course, would serve as a

valuable guide for both students and practitioners of criminal law. Subsequent to my appointment,

developments in the law. I consider myself fortunate to have been asked by the publishers of the

previous editions to do the honour of working on a new fifth edition of this text. It is my hope that

ensure its continued status as an indispensable reference for all persons in the legal fraternity.

Roger Ramgoolam is the course director for Criminal Practice and Procedure at Hugh Wooding Law School. He is an experienced practitioner and has served as state counsel for the Director of Public Prosecutions, San Fernando, as well as in the capacity of Magistrate for the Judiciary of Trinidad and Tobago.