Communes and Despots in Medieval and Renaissance Italy 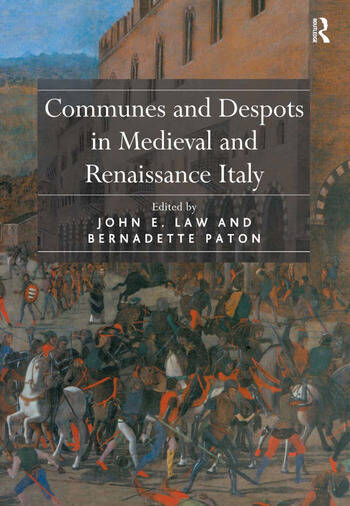 Communes and Despots in Medieval and Renaissance Italy

Building on important issues highlighted by the late Philip Jones, this volume explores key aspects of the city state in late-medieval and Renaissance Italy, particularly the nature and quality of different types of government. It focuses on the apparently antithetical but often similar governmental forms represented by the republics and despotisms of the period. Beginning with a reprint of Jones's original 1965 article, the volume then provides twenty new essays that re-examine the issues he raised in light of modern scholarship. Taking a broad chronological and geographic approach, the collection offers a timely re-evaluation of a question of perennial interest to urban and political historians, as well as those with an interest in medieval and Renaissance Italy.

John E. Law is Reader in the Department of History at Swansea University, UK. Bernadette Paton is a senior editor at Oxford University Press, UK.

'This volume includes contributions by the finest historians of late-medieval and Renaissance Italy on topics of abiding concern for history and political thought. Following the lead of the late Philip Jones, the contributors show how the old dichotomies of order versus political violence and liberty versus despotism no longer hold. No other work represents the dynamism of the historiography of Italy as well as this.' Edward Muir, Northwestern University, USA 'The Editors have assembled an impressive team of his former doctoral students to revisit Philip Jones's 1965 analyses (later much developed) of Italian communal and despotic government and politics, which eroded prevailing myths about 'the Renaissance State', stimulating their, and my own, early researches. This collection should again revive and revivify socio-political analysis, in the light of changed historical approaches and methods for which contributors are now themselves noted.' Christopher F. Black, Honorary Research Professor of Italian History, Glasgow University 'Philip Jones was one of the great historians of medieval Italy, and this book honours his memory. With its galaxy of international stars, it is a real step forward in a field Jones made his own.' Christopher Wickham, Chichele Professor of Medieval History, All Souls College, University of Oxford, UK 'In sum, this collection is both interesting and wide-ranging, reflecting not only the breadth of the scholar it honors but also the continuing vivacity of medieval and renaissance Italian history.' The Medieval Review '... the editors are to be congratulated for having produced a remarkable volume that students of Italian history will undoubtedly find invaluable.' Reviews in History '... this is a strong and cohesive contribution from a number of fine scholars that sheds light on key elements of lordship, oligarchy, and political power during the Renaissance.' Renaissance Quarterly ’The essays in this work are not the last word on Rena