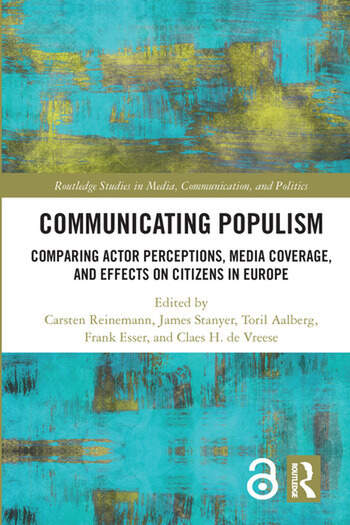 The studies in this volume conceptualize populism as a type of political communication and investigate it comparatively, focusing on (a) politicians’ and journalists’ perceptions, (b) media coverage, and (c) effects on citizens.

This book presents findings from several large-scale internationally comparative empirical studies, funded by the European Cooperation in the field of Scientific and Technical Research (COST), focusing on communication and the media within the context of populism and populist political communication in Europe. The studies are based on comparative interview studies with journalists and politicians, a large-scale comparative content analysis, and a comparative cross-country experiment using nationally representative online-surveys over 15 countries. The book also includes advice for stakeholders like politicians, the media, and citizens about how to deal with the challenge of populist political communication.

This enlightening volume is ‘populist’ in the best sense and will be an essential text for any scholar in political science, communication science, media studies, sociology and philosophy with an interest in populism and political communication. It does not assume specialist knowledge and will remain accessible and engaging to students, practitioners and policymakers.

Chapter 1 and 11 of this book are freely available as a downloadable Open Access PDF under a Creative Commons Attribution-Non Commercial-No Derivatives 3.0 license.  https://tandfbis.s3-us-west-2.amazonaws.com/rt-files/docs/Open+Access+Chapters/9781138392724_oachapter1.pdf

Carsten Reinemann is a professor of political communication and head of the Department of Media and Communication at Ludwig-Maximilians-University Munich, Germany. His research interests include populism, extremism, political journalism, and media effects.

is a professor of communication and media analysis, School of Social Sciences, Loughborough University, UK. His work has appeared in a wide range of academic journals, and he is the author of Intimate Politics (2013), Modern Political Communication (2007), and The Creation of Political News (2001).

is a professor and head of the department of sociology and political science at NTNU in Trondheim, Norway. Her research interests include comparative politics, election campaigns, how media affects public opinion, the relationship between media and politics, and the role of stereotypes.

is a professor of international and comparative media research at the University of Zurich. His research focuses on cross-national studies of news journalism and political communication.

is a professor and chair of political communication at the Amsterdam School of Communication Research (ASCoR), University of Amsterdam. His research focuses on political journalism, populism, news media effects, and public opinion.