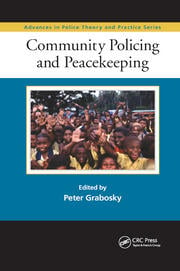 In modern industrial societies, the demand for policing services frequently exceeds the current and foreseeable availability of public policing resources. Conversely, developing nations often suffer from an inability to provide a basic level of security for their citizens. Community Policing and Peacekeeping offers a fresh overview of the challenges of community policing in advanced societies and peacekeeping in weak nations, demonstrating how going beyond traditional models of police work can provide solutions in troubled communities.

Responding to the needs of the community

Featuring contributions from world-class scholars, this volume emphasizes the importance of cultural and political sensitivities in police work. Offering comparative perspectives from the United Kingdom, Australia, the United States, South Africa, and China, it explores the paradigm of community policing that involves consultation with community members, responsiveness to their security needs, collective problem-solving to identify the most appropriate means of meeting these needs, and mobilization of police services. Exploring the challenges and pitfalls of these collaborative efforts, the book examines how traditional models of police work have evolved to embrace the needs of communities.

Keeping peace at home and abroad

The second part of the book focuses on police peacekeeping efforts in countries torn apart by civil strife. It includes chapters on police collaboration with the United Nations, Australian and Canadian efforts abroad, CIVPOL (civilian police peace operations), and programs in Papua New Guinea and Cambodia. The book shows how expanding the role of the police beyond the limits of fighting crime can help contribute to safer, more stable communities.

Community Policing, East and West, North and South. Seeing Like a Citizen: Field Experiments in Community

Intelligence-Led Policing. Democratic Policing. Community Policing Without the Police? The Limits of Order Maintenance by the Community. The Small-Scale Initiative: The Rhetoric and the Reality of Community Policing in Australia. Community Policing and Accountability. Police - Social Service Collaboration: Creating Effective Partnerships. Embedding Partnership Policing: What We’ve Learned from the Nexus Policing Project. Serious Gun Violence in San Francisco: Developing a Partnership-Based Violence Prevention Strategy. A Thin or a Thick Blue Line? Exploring Alternative Models for Community Policing and the Police Role in South Africa. Community Policing in China: a New Era of Mass Line Policing. The Effect of Community Policing on Chinese Organized Crime: The Hong Kong Case. Police Development: Confounding Challenges for the International Community. Policing Peace: Evolving Police Roles in UN Peace Operations. "It Wasn’t Like Normal Policing": Voices of Australian Police Peace-Keepers in Operation Serene, Timor-Leste 2006. What Happens Before and After: The Organizational and Human Resources Challenges of Deploying Canadian Police Peacekeepers Abroad. Policing Business Confidence? Controlling Crime Victimization in Papua New Guinea. Police Capacity Development in the Pacific: The Challenge of the Local Context. Reinventing Policing Through the Prism of the Colonial Kiap. Policing in Cambodia: Legitimacy in the Making?

Peter Grabosky is a professor in the Regulatory Institutions Network at the Research School of Pacific and Asian Studies at Australian National University.